With this season’s Leonard irregular scoring explosion, it is certain that there will be more surprises. And it is lucky that in early 2020 there finally came Adidas’s DAME 6,Lillard’s sixth signature shoe and the third model of Adidas that adopts lightstrike. Adidas DAME has always been a reputable and popular series with its shoes having outstanding appearance and practical performances. So when Adidas DAME 6 “Ruthless” was released, it is a model looked forward to by many fans. 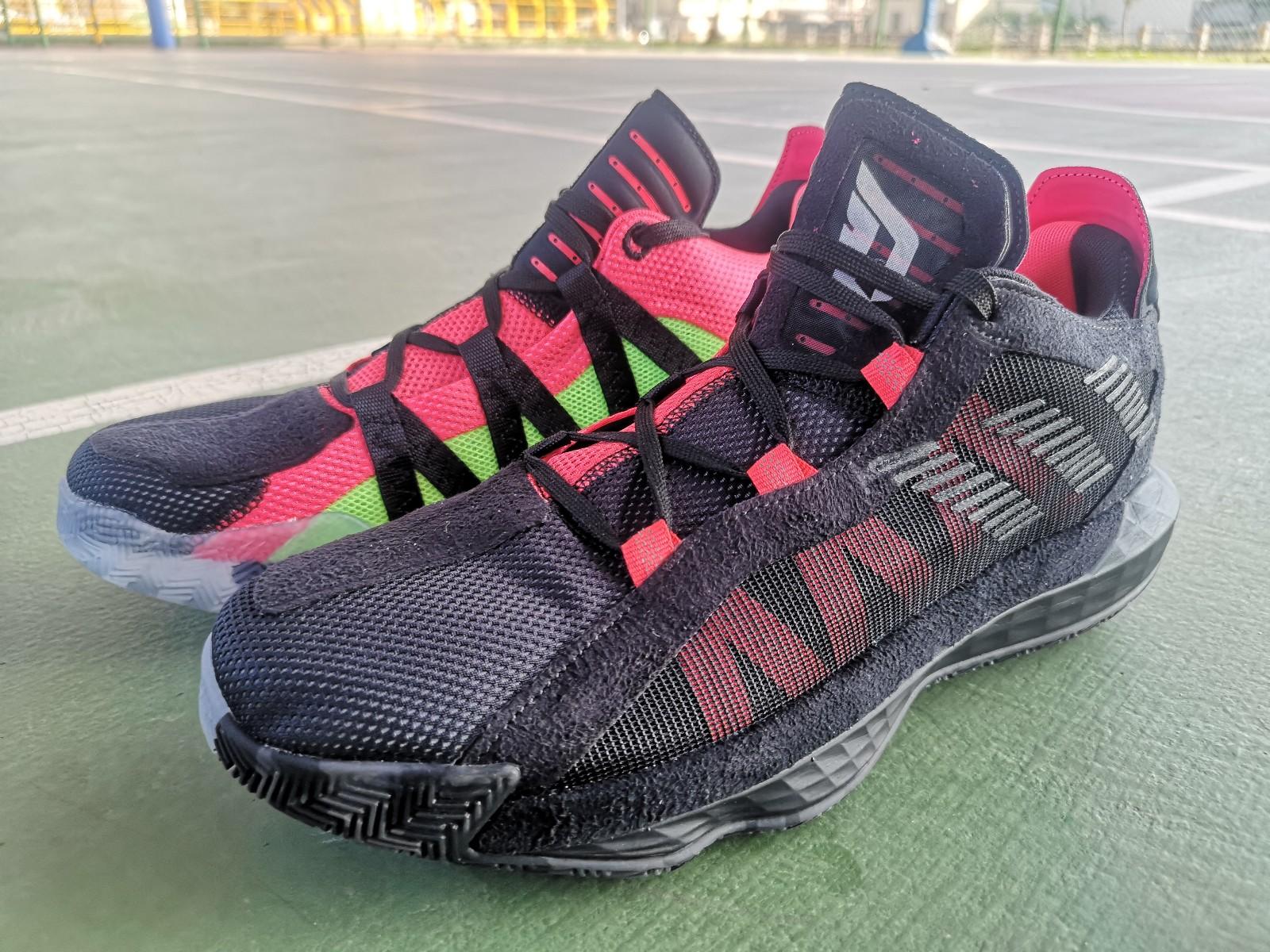 Absolutely, this impressive DAME 6 has an overall bright appearance. Many people even observed that the shoes are “unforgettable” after the first sight. The DAME 6 that oftenest performs like a beast on court is worthy of the name “Ruthless”. Over the years, for me, DAME 1-5 has not been missed and certainly, this DAME 6 should also be included. 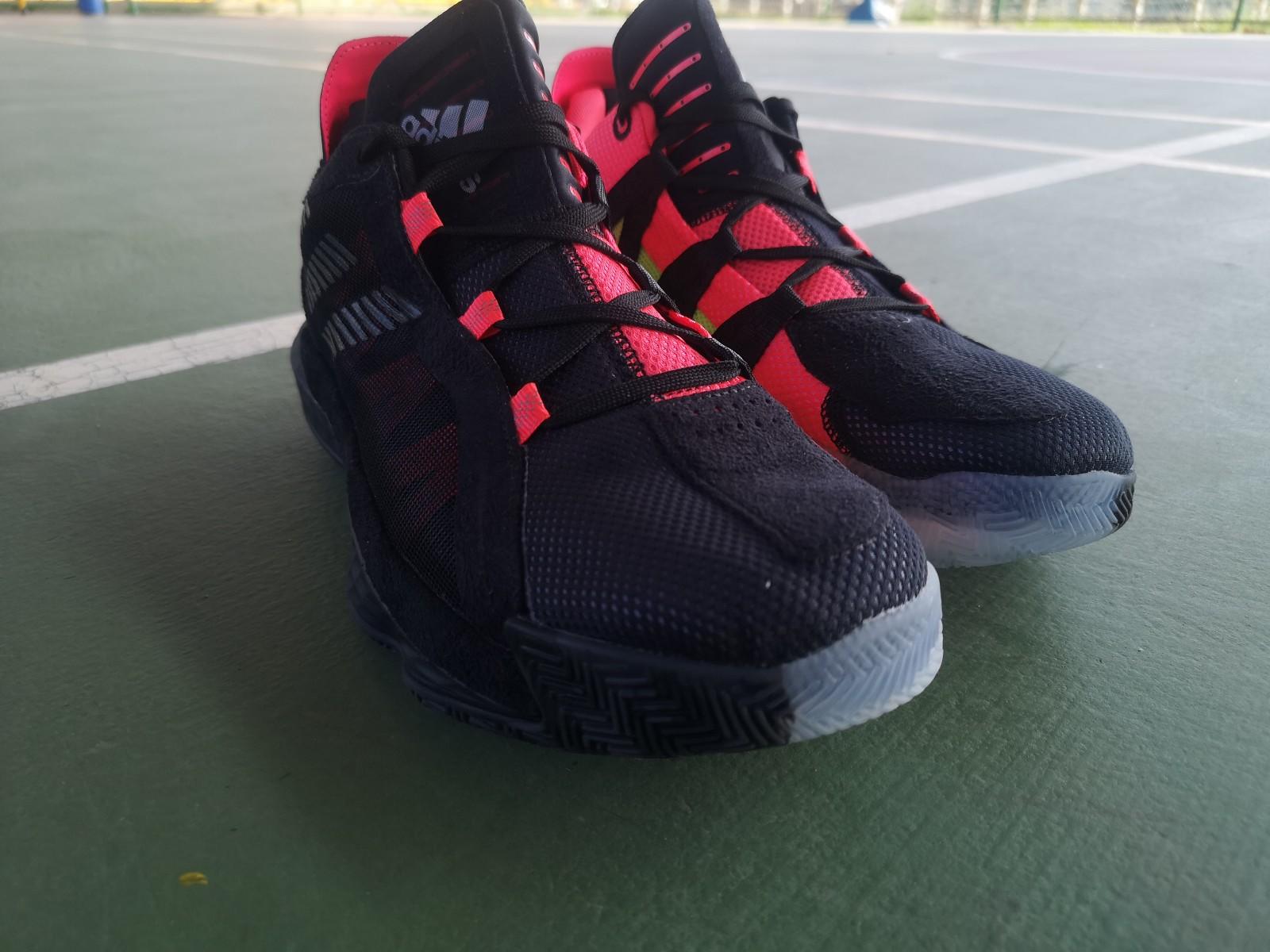 With the exception of the midsole, the materials of the other parts of the shoe are of average components. However, with the existing technologies, Adidas added some details into the shoes which looks more inviting, right? The inside and outside asymmetrical vamp has been added with reflective materials whereas the  shoelaces are equipped with corresponding color + reflective material. On top of that, the tongue and the logo above it, the collar and the outsole are all compelling details of the shoes. 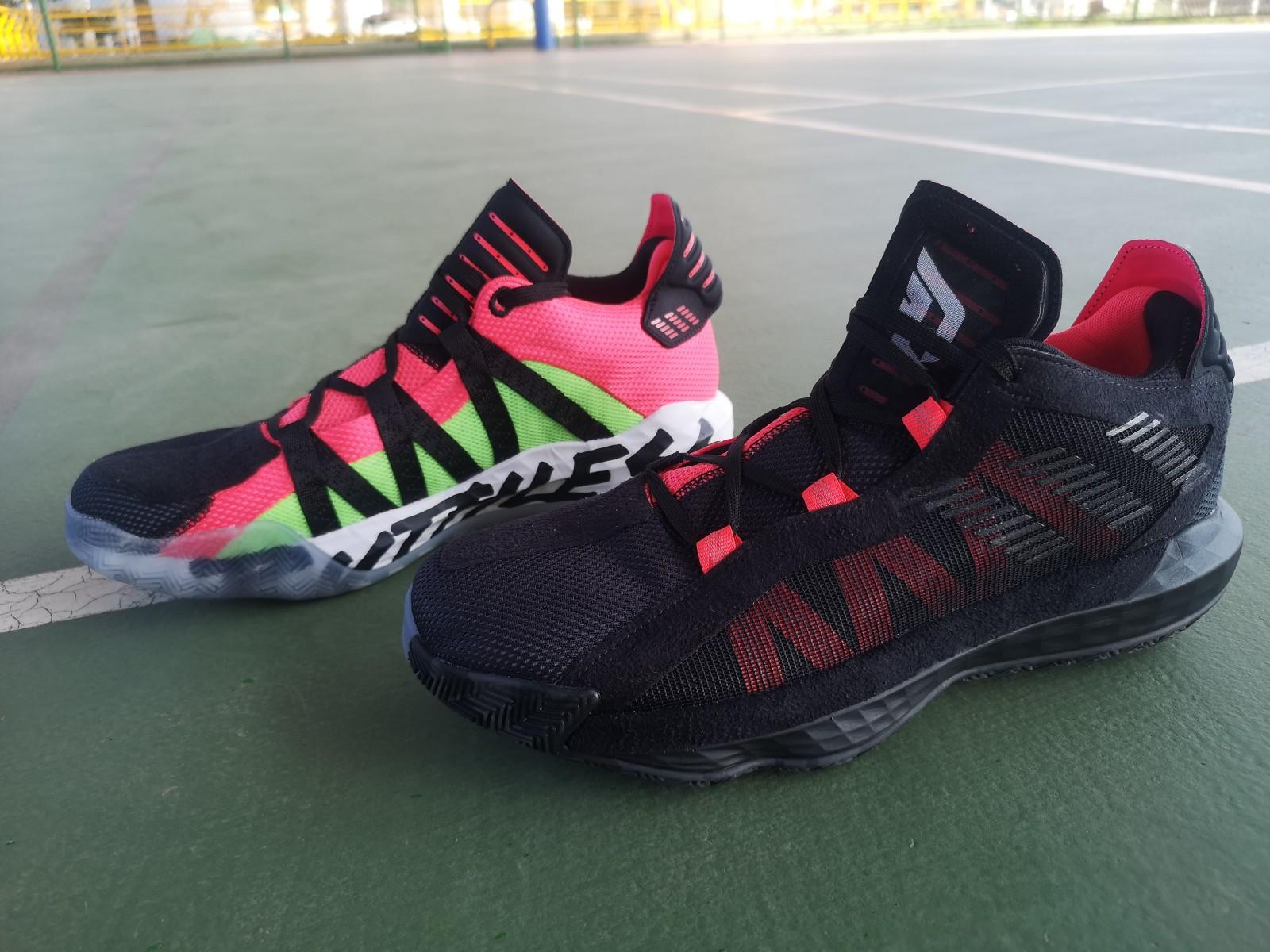 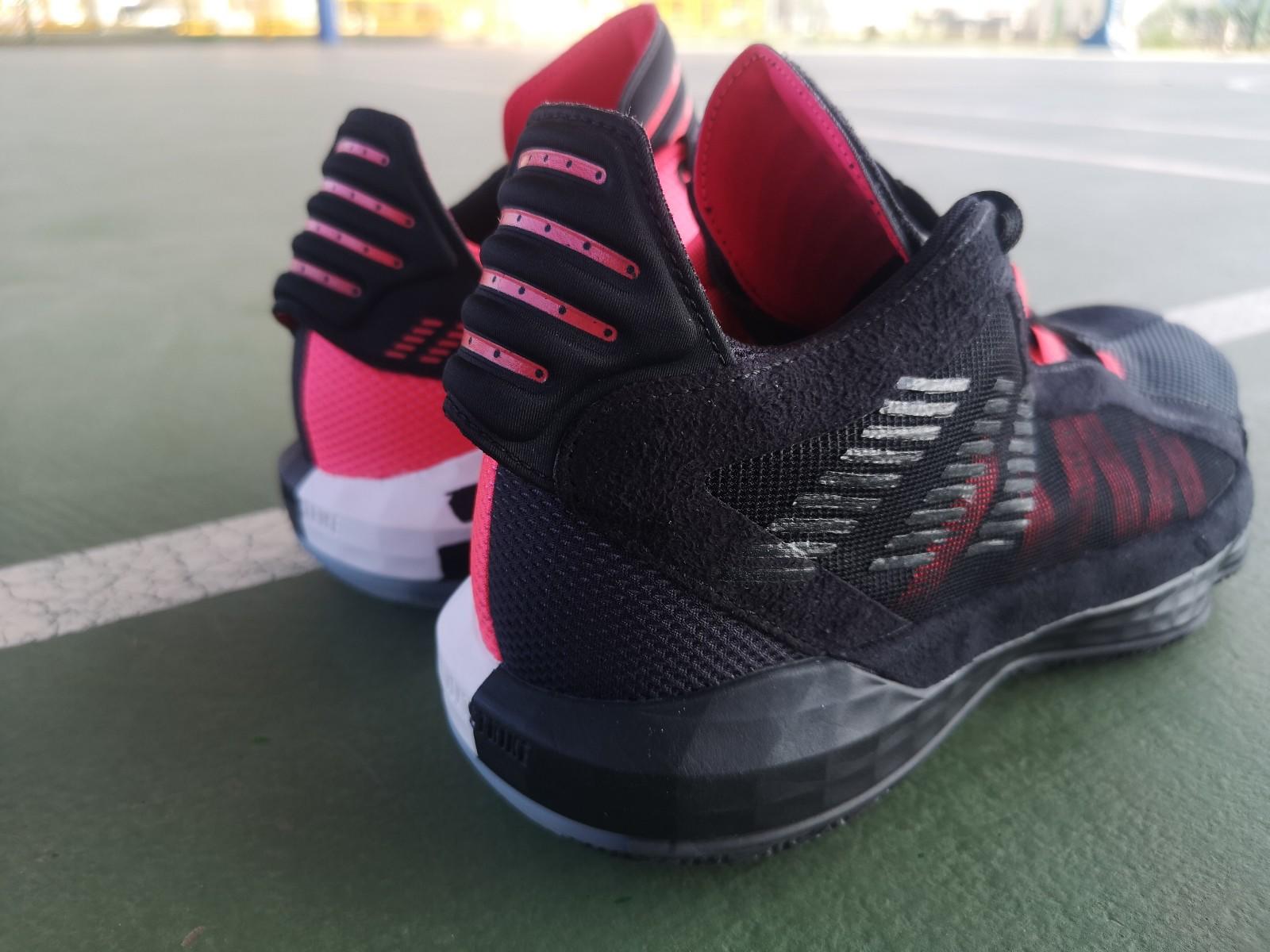 The layers of the mesh and shoelace make this pair of shoes a far cry model from others. The Adidas logo hidden on the outside of the heel forms a nice view with the horizontal stripes at the heel. And also,, the tongues of the shoes are made different, which is fantastic. 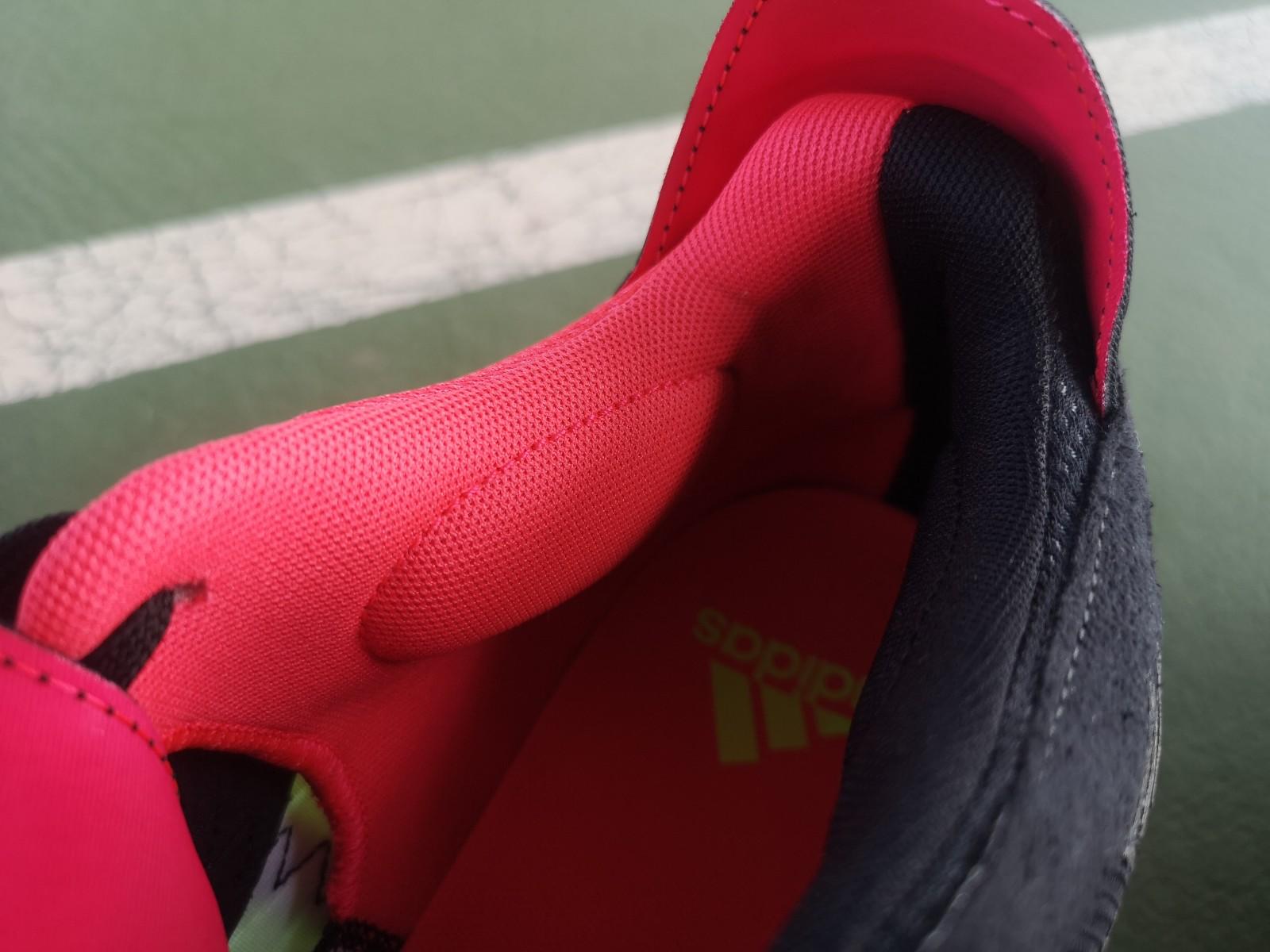 When the DAME 6 first came out, I felt it quite familiar, which was also confirmed later. In  retrospect, this yin-yang match had been seen in CP3 7 while that of DAME 6 was completed. 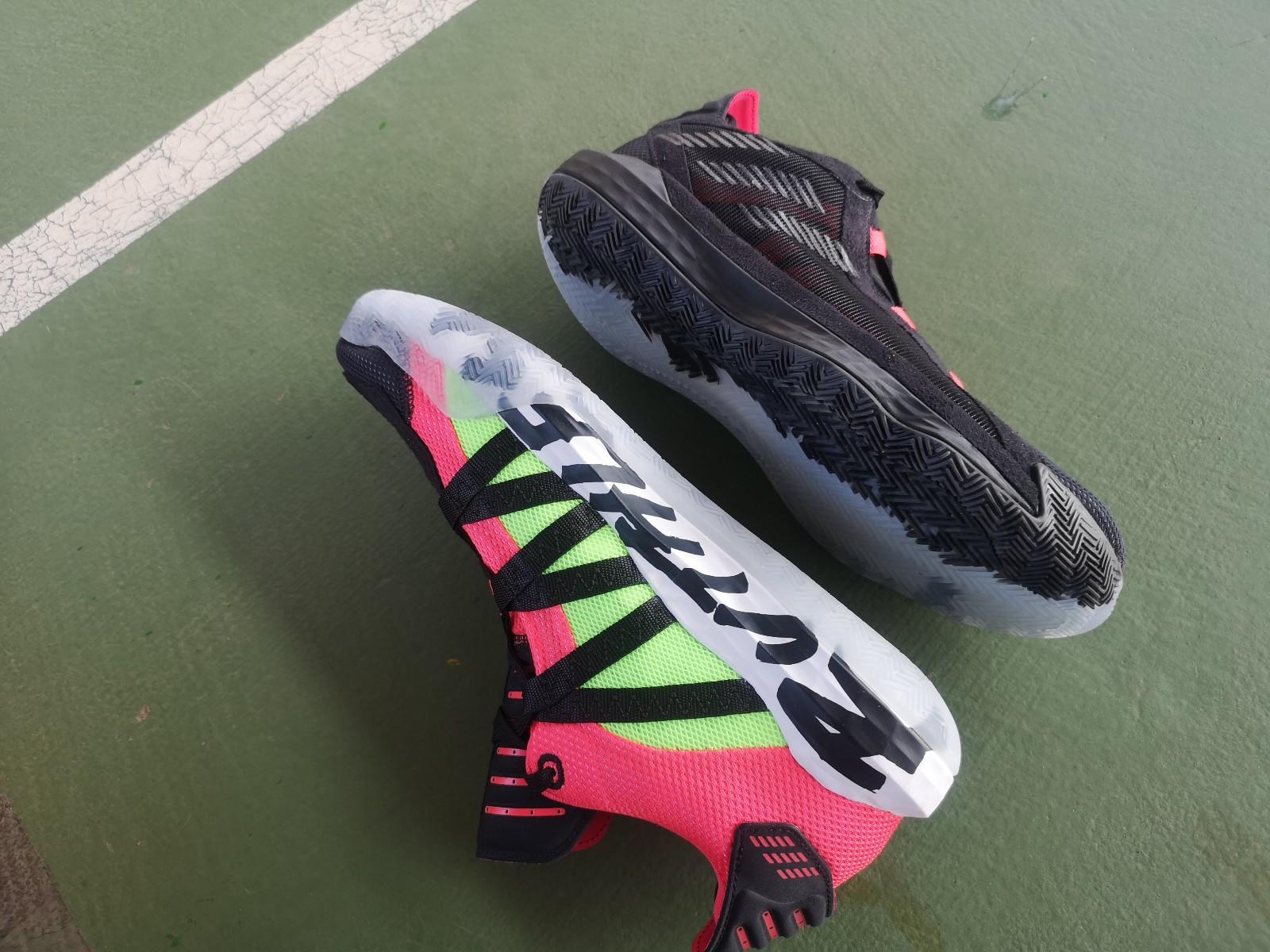 There is padding added inside the ankle and the wrapping is not bad as well providing that you pick the right size. 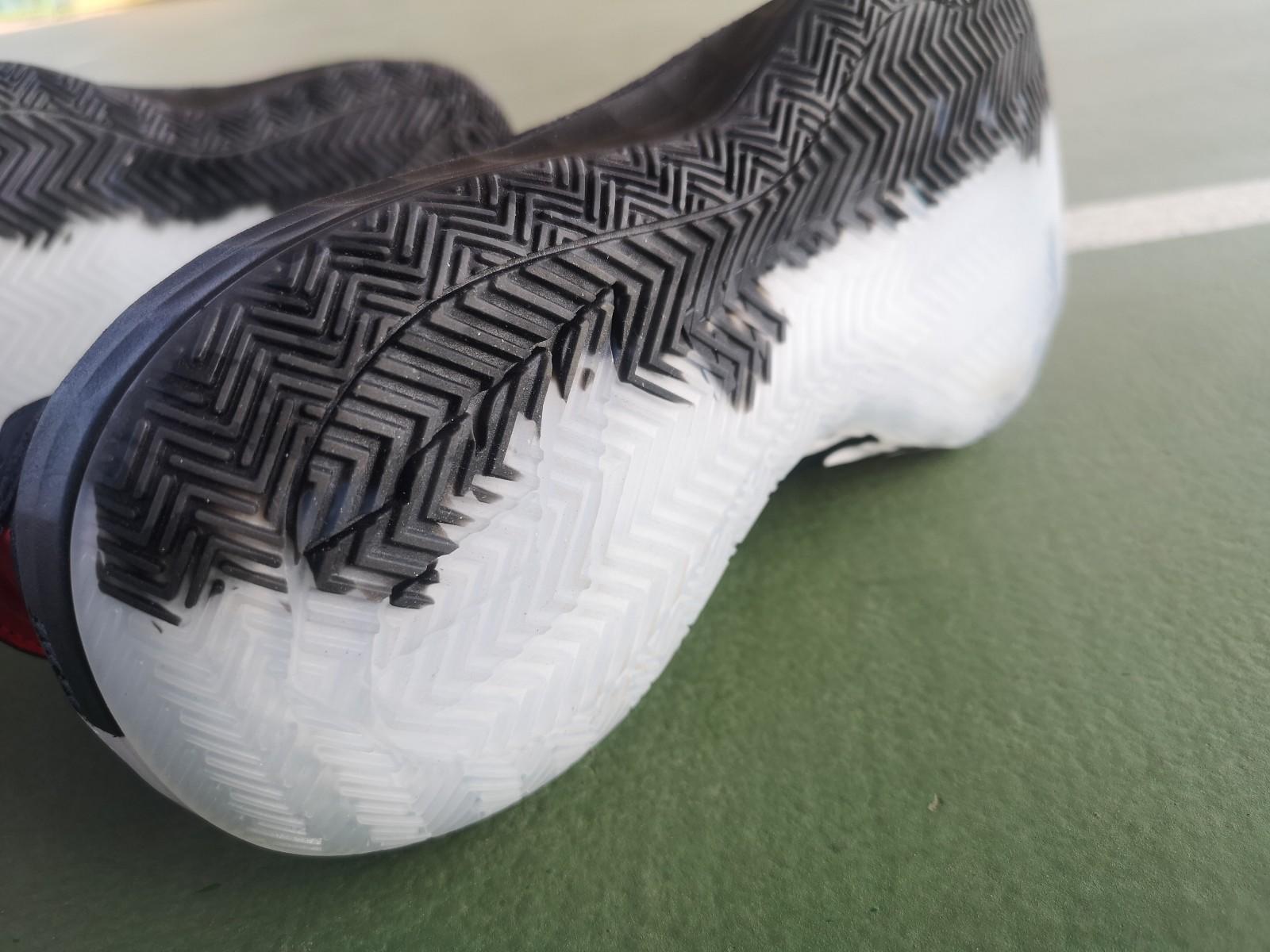 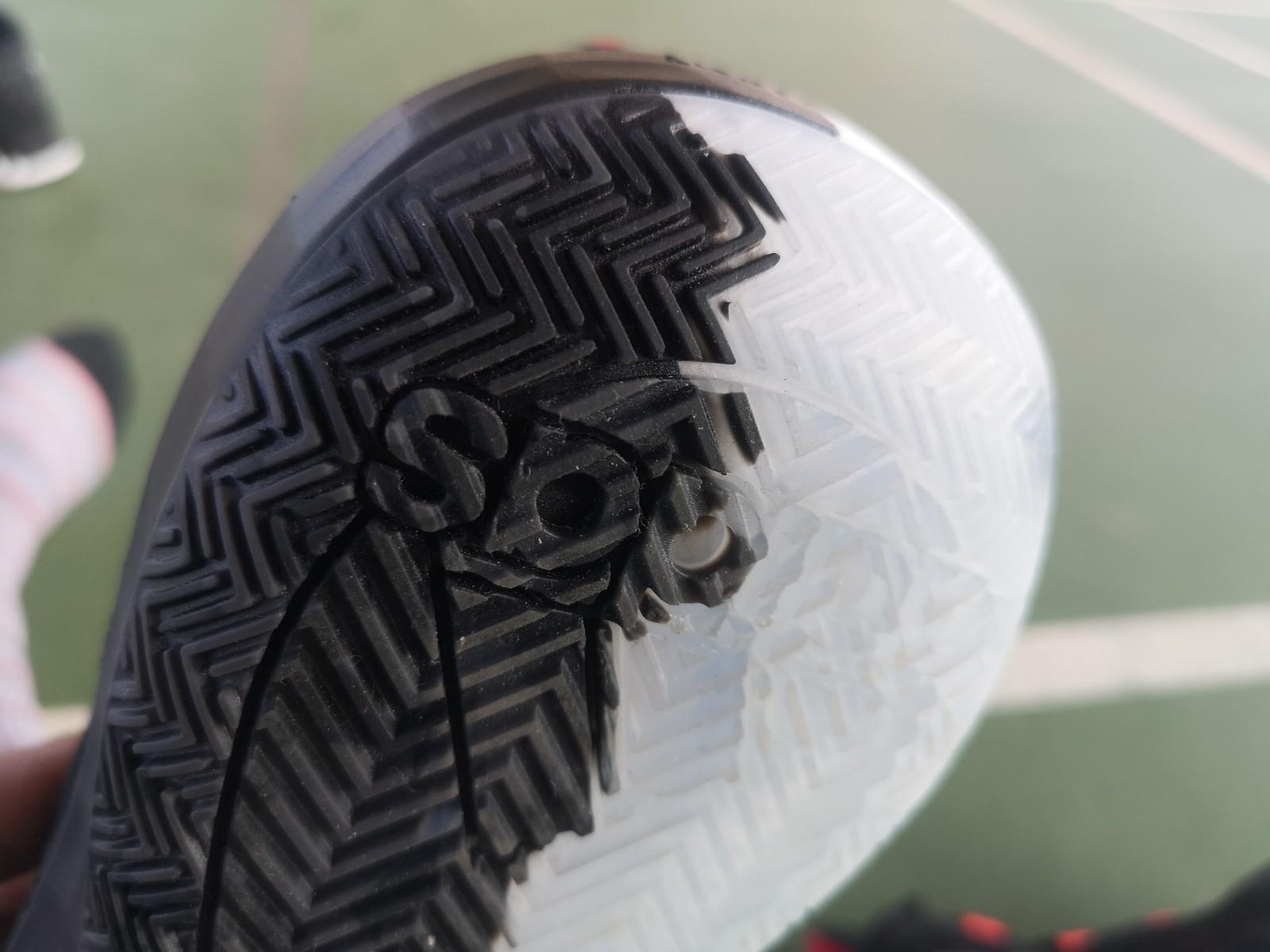 The fish bone grain + deep grains, from the perspective grip and durability,  are of great help. Looking  carefully at the sole, you may find that  the depth of the scratch is not consistent: the front foot and the heel  grains are deeper while the middle scratch is much shallower. 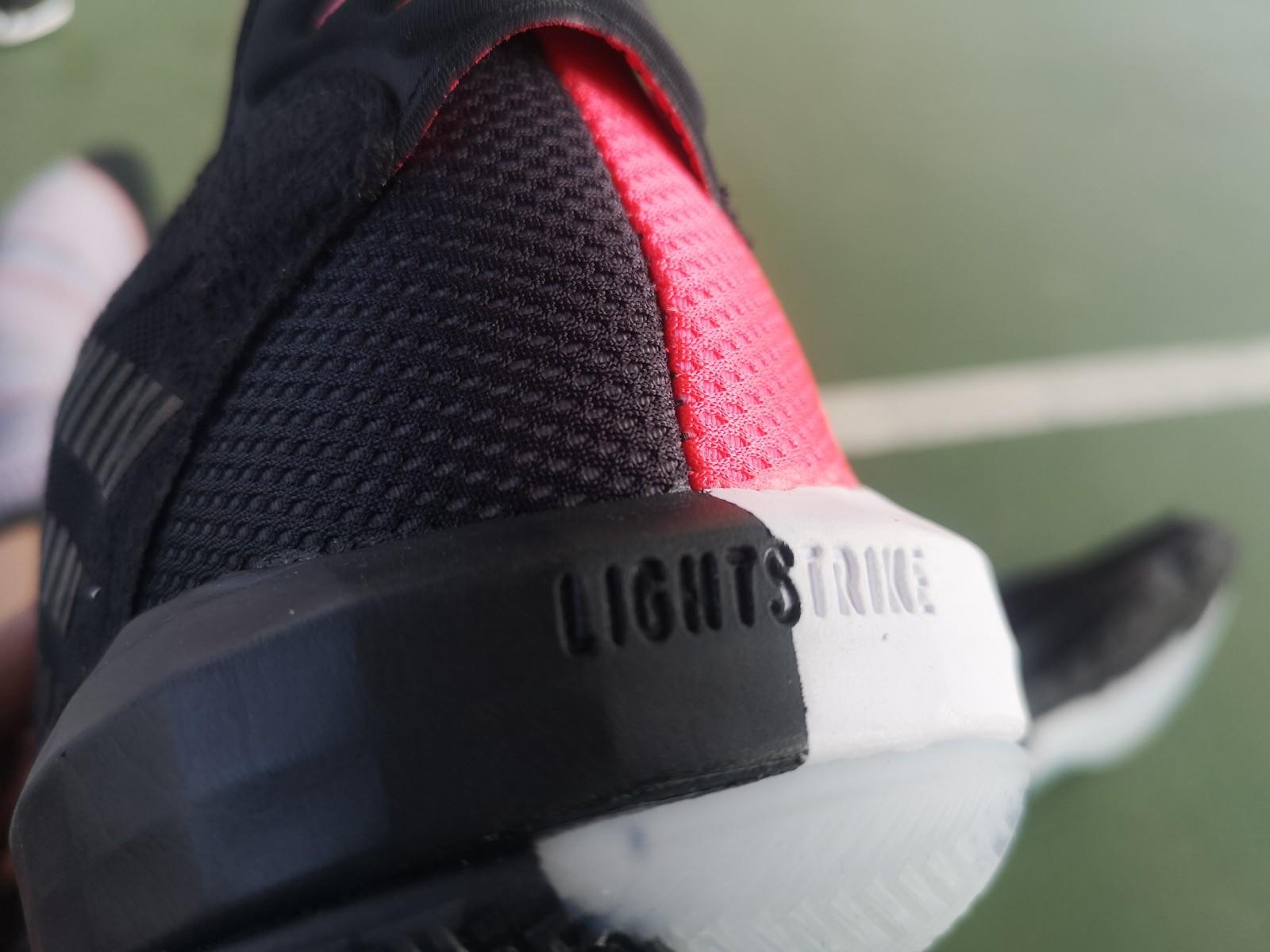 The midsole technology LIGHTSTRIKE is printed on the heel, which is distinctive and recognizable. But the problem is that the shoe have twisted signs after you wear it for only several times. 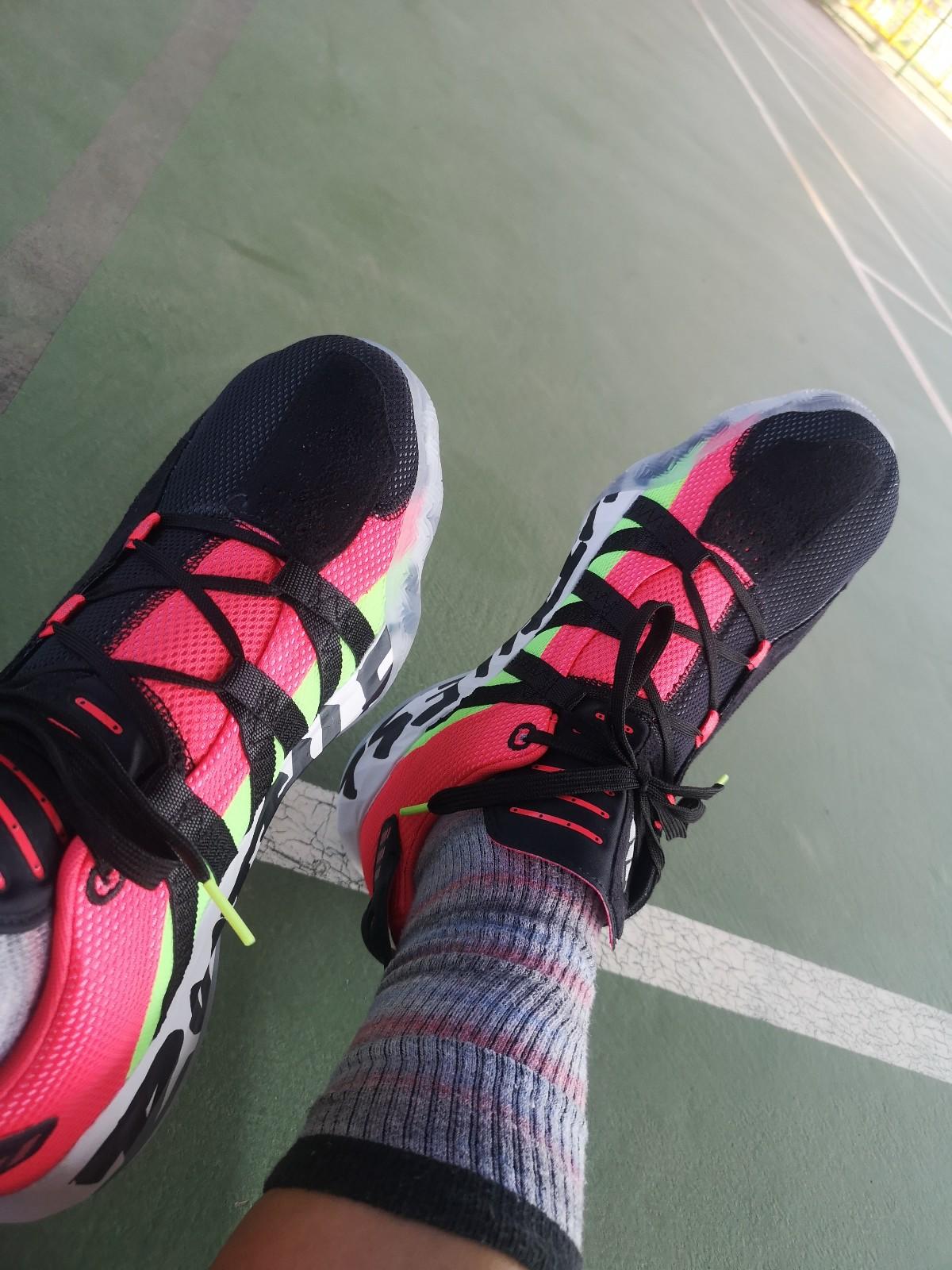 The first impression you will get when you put on the shoes is that the shoes are quite light weight and soft. Notwithstanding there are very few shoelace holes, the wrapping is still online. 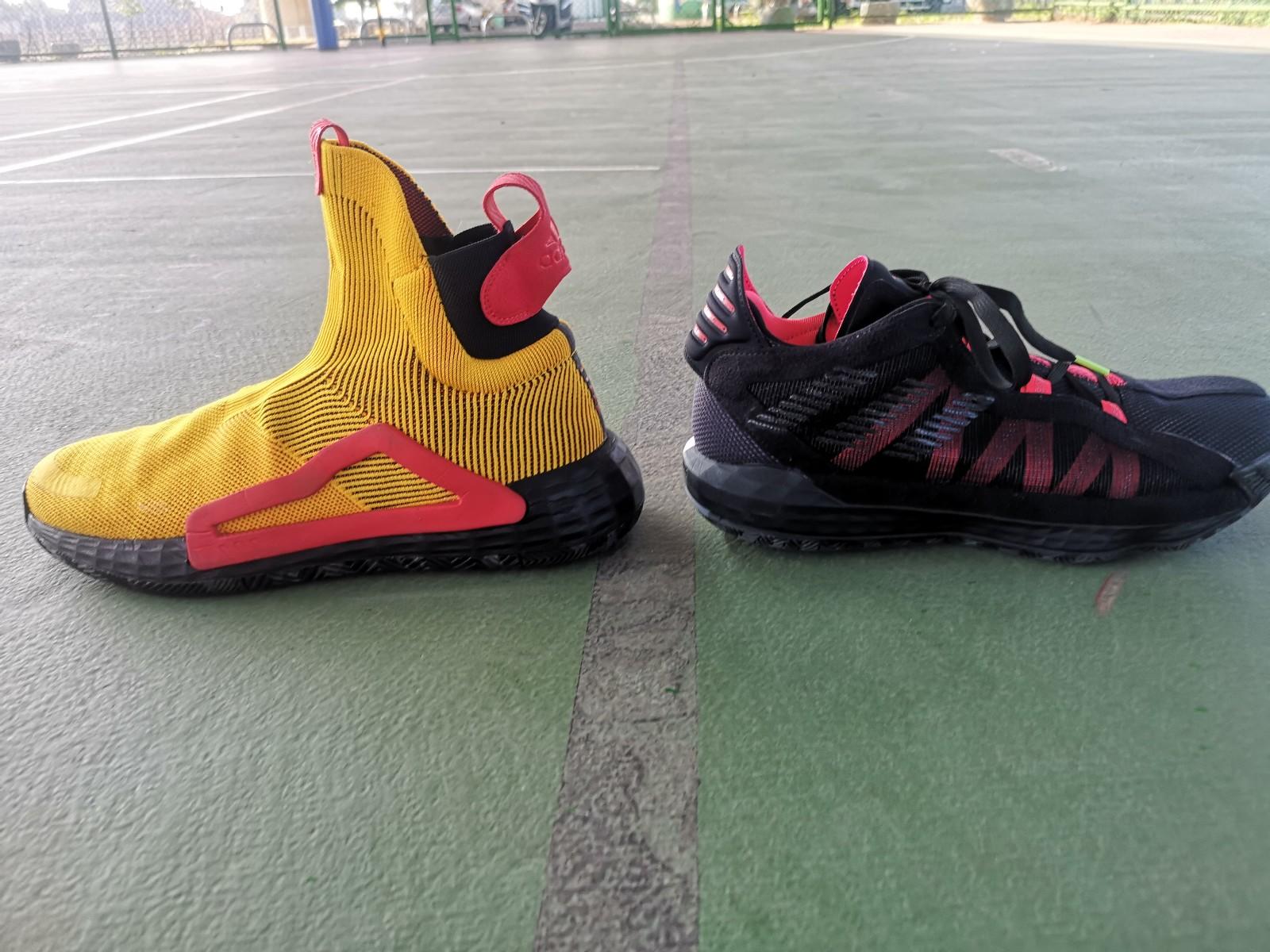 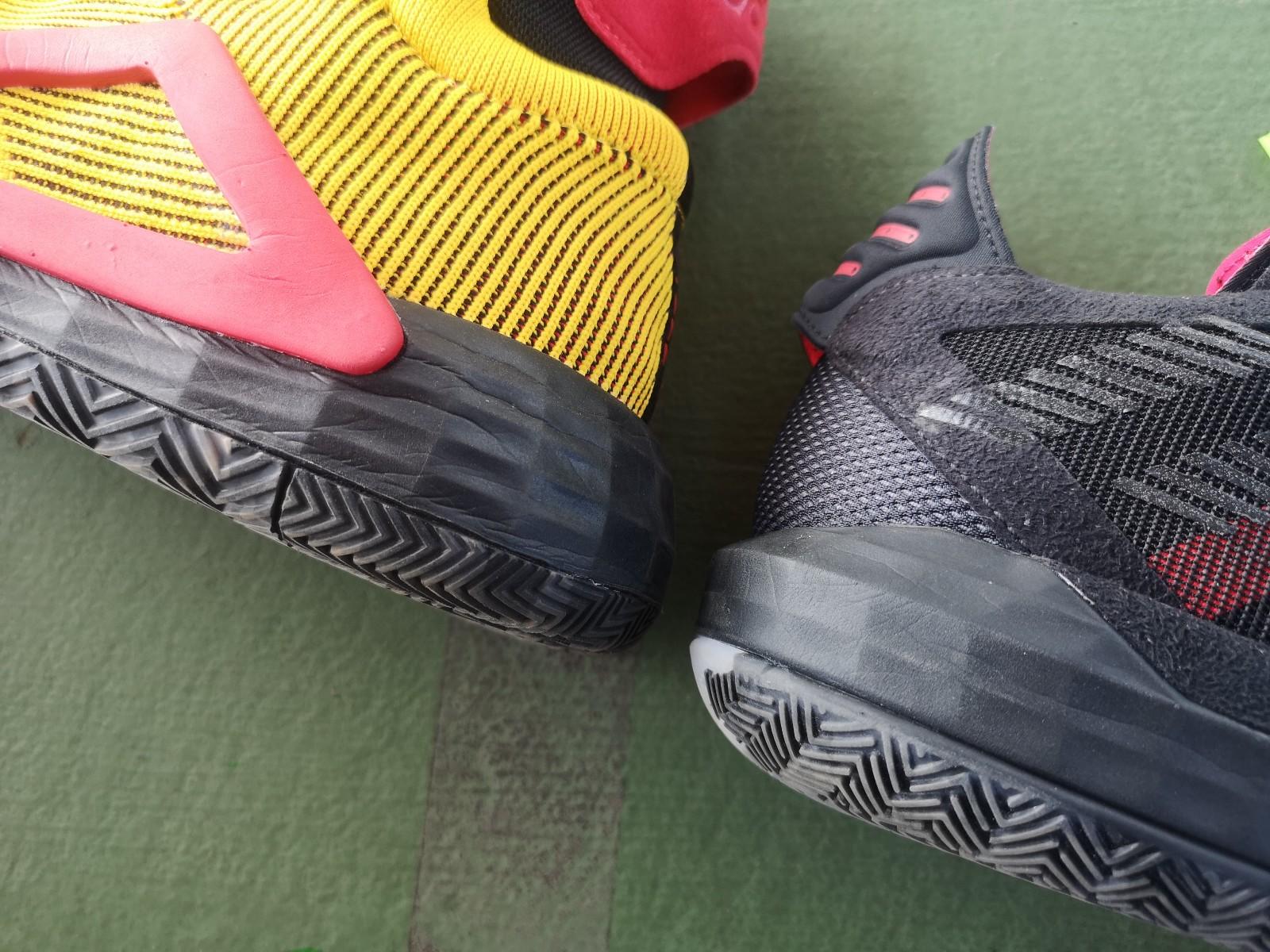 In the preliminary testing,  I also brought with me two other pairs of shoes that also use LUGHTSTRIKE: ,N3XT L3V3L+ HARDEN 4. At the moment, the biggest feeling of LIGHTSTRIKE lingering on my mind is  that it is light in weight and quick in response. However, the cushioning can only be said to be above average. For these three pairs that use LIGHTSTRIKE, the cushioning is: N3XT L3V3L > DAME 6 > HARDEN 4. If you don’t require too much of the cushioning, then this is a nice model for you and you might as well take it into consideration.