Some time later, after several moths’ testing, it suddenly occurred to me that it is high time that I wrote a review about this Zoom Kobe 6 to relive fans’ anxiety. I should say that the overall impression of the shoes, during these times’ company, is dynamite. For more information about its performance, go on reading this review then. 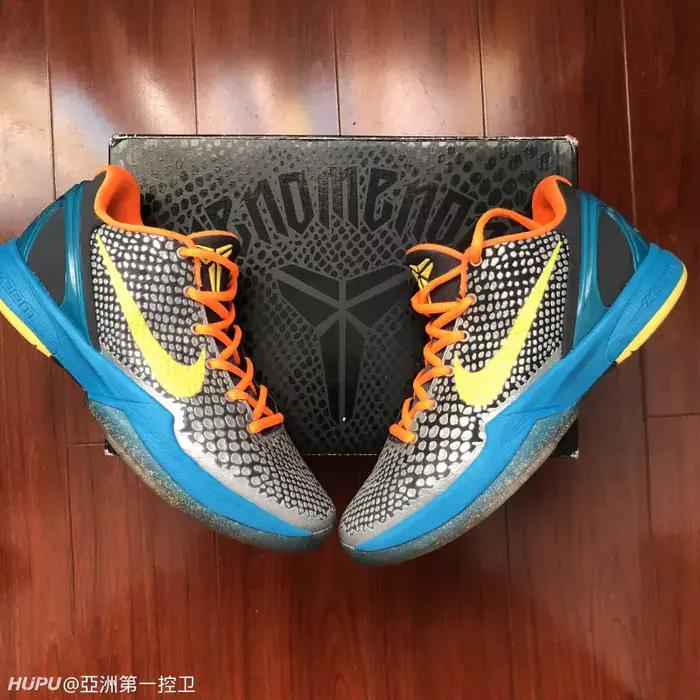 For the shoe box, it is mainly black and printed on it are some basic information of the shoes. Regarding the laces, they are blue ones in the first, but I just changed them into orange ones because, in my opinion, they suit the lining much better. 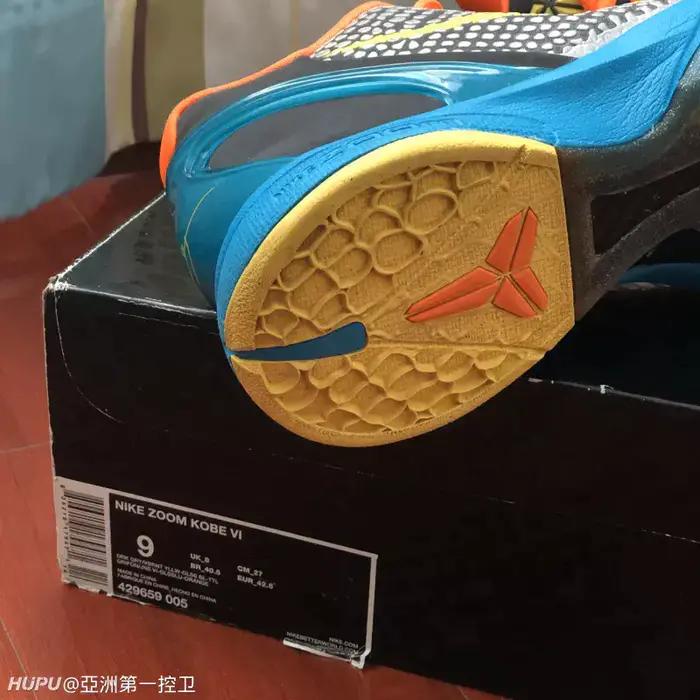 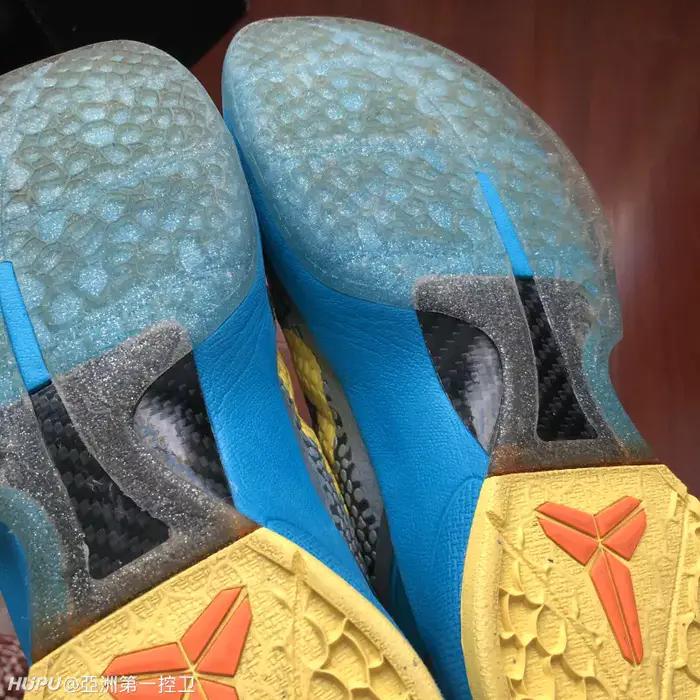 Looking again at the outsole, I recollect the days when I wore the shoes to many matches and it was this Zoom Kobe 6 that has been with me the longest. It always reminded me that I had once wore it to several matches in one day and it also witnessed most of my happiness and sadness. Now the soles are worn out like this. You can see that the front part has oxidized into yellow and isn’t decent any more. Anyway, it can be said that that shoes of mine have spared no effort in the performance of its duty. 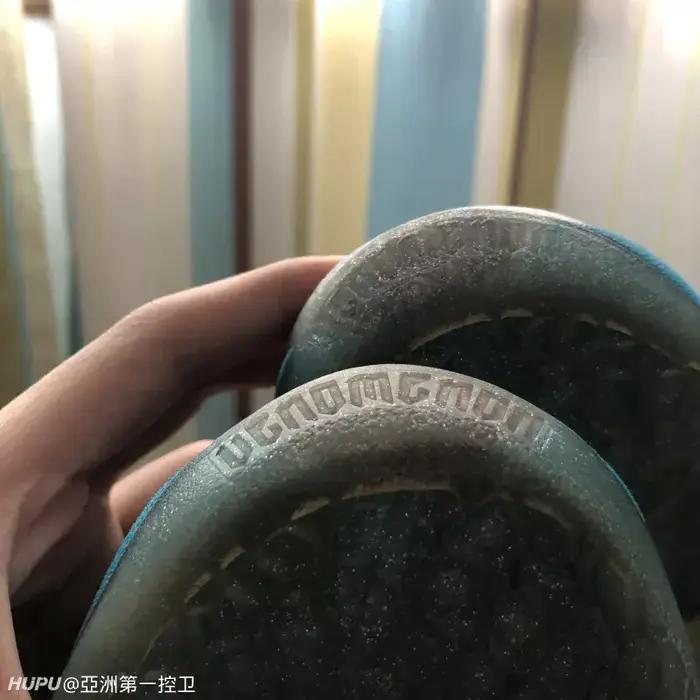 For the durability, you don’t have to worry about it. I know some of you may wonder and ask that “the shoes have just lasted for several months?” Well, the answer is “yes”. However, when considering the durability of this shoes, you must factor in the intensity of my regular exercise. The fact is that I wore the shoes for my matches and I even wore them for several miles’ running. So, having such performance, the shoe can be said to be on top of the field. 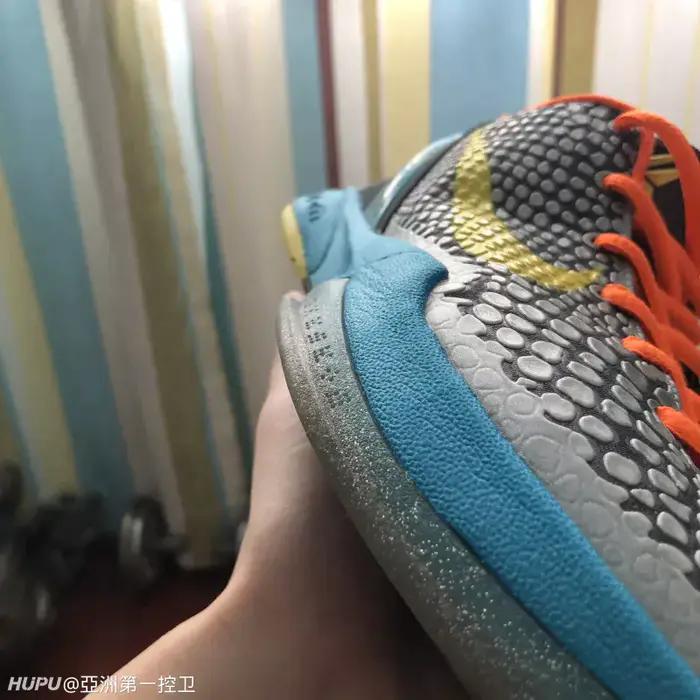 The Venomenon on the toe, the kobe code on the outside of the shoe, and the hard scales on the upper surface are all nice designs of the shoes and make the shoe quite outstanding. Surely, you have got impressed right now at the sight of the images alone. 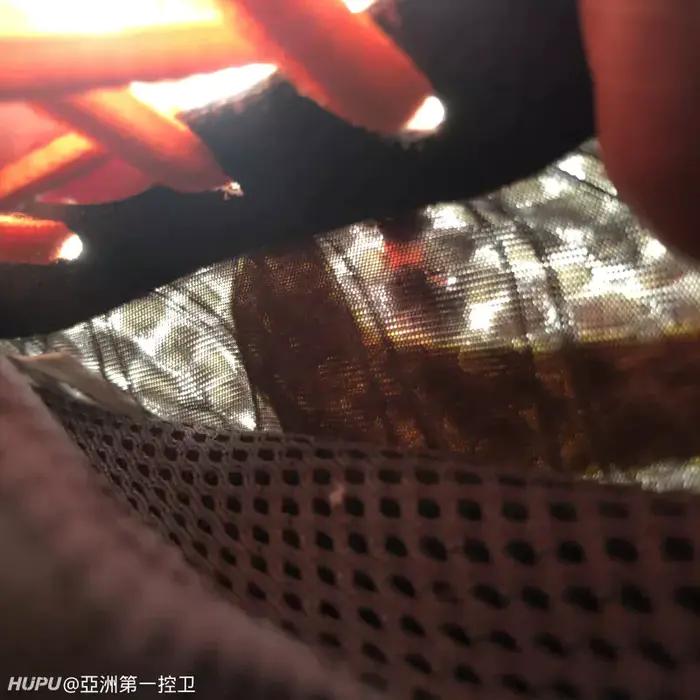 The Zoom Kobe vamp, which feels like ordinary thin plastic, is striking. The outside layer, the flying line of the middle layer and the inside mesh cloth all result in an excellent wrapping for the shoes. And the tongue mesh of the shoes contains some rigid polygonal air holes, thus giving air permeability and providing certain support. To speak truth, I like it very much and I think I can not praise it enough. The shoes do have some flaws, but they do have nice setups and excellent performance. 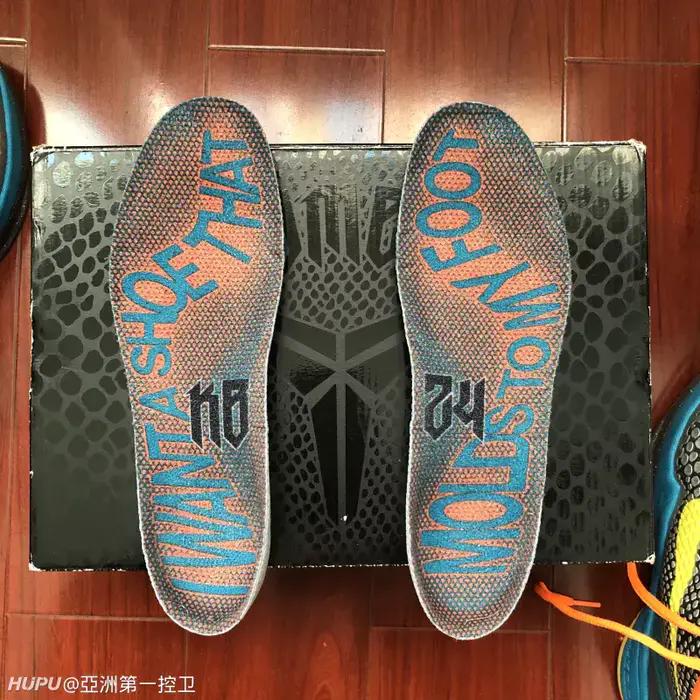 The left sole is printed “KB” and the right “24” and the sentence on them is “I want a shoe that molds to my foot.” Delicate! As for the midsole setup, the front is the shape of “goose-egg” zoom and the middle is a carbon piece. These are all classic Kobe shoes setups and if you are a fan of Kobe series, you must be very familiar with it . 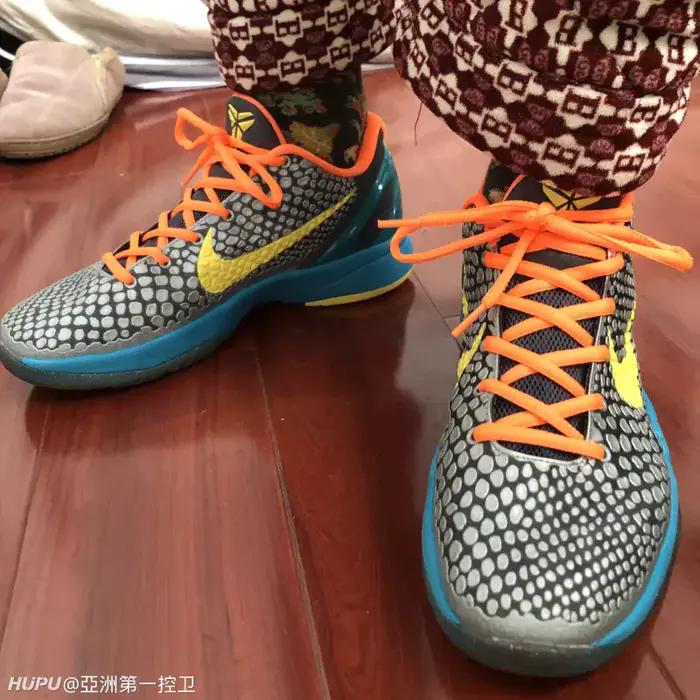 As a fan of Kobe series for more than ten years, I sincerely hope that the shoes can put their potentials into full play and bring the most to fans. In my shoe closet, there lie several pairs of Kobe shoes and as time passed by, they are always my beloved ones and they will continue to company with me in the future. Last but not the least, whether this Zoom Kobe 6 suits you or not, I still hope you can find your the one that suits you most.

After Kobe retired the Kobe shoes are still being loved by NBA players either the AD series or the Protro series. Earlier report from an official media has shown that Kobe series was worn most frequently during the 18 to 19 season by most NBA players. And I wanna say that besides the charm of Kobe himself the Kobe series also beckons a lot of people by its nice appearance, it comfortable wearing  experience and above all its excellent performance. And for me, I’ve been benefiting from Kobe series for years and I am quite grateful for that. As a senior fan of Kobe I consider it necessary to own a pair of Kobe shoes and luckily I got another Kobe AD NXT FF with the  exception of those I’ve already had. 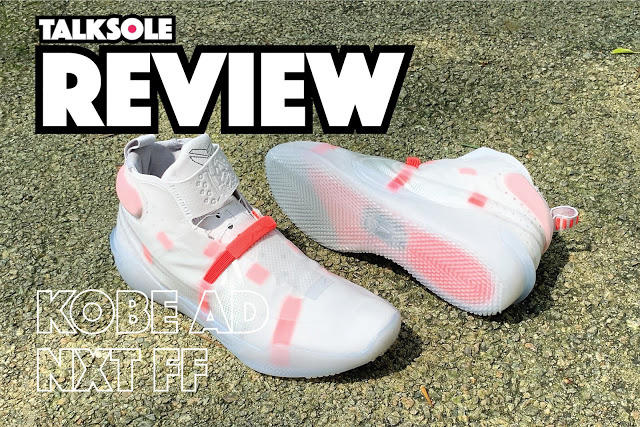 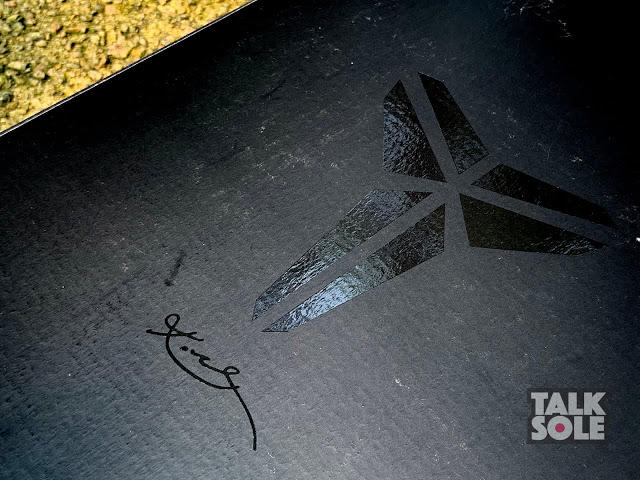 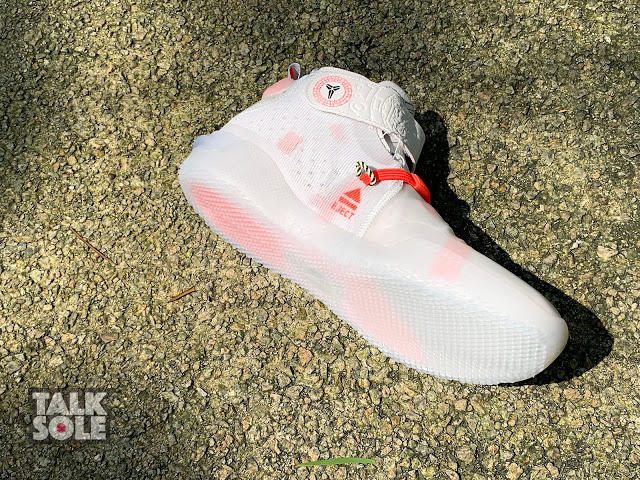 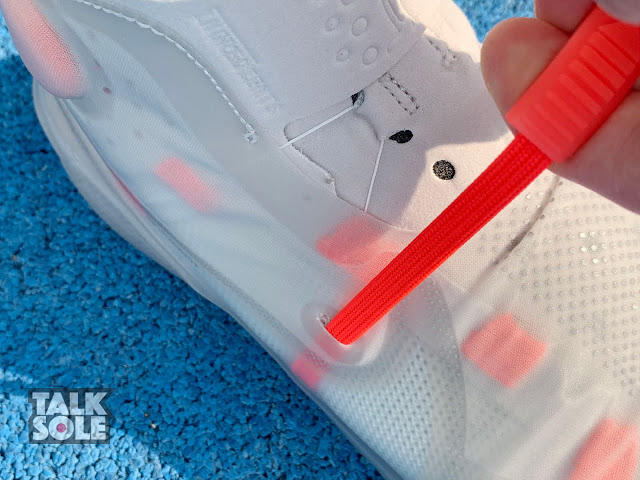 Today I am gonna talk about this Kobe AD NXT FF. As regards its performance, keep on reading then. This Kobe AD NXT FF is the third pair of AD NXT shoes and the “FF” represents the Fast Fit system which as well can be found in Air Jordan 33. The shoes named with the so-called “NXT” are those that adopt some latest tech. Take the Kobe AD NXT 360, it uses the React + Lunarlon double density insole and the new Fiyknit technology. As for Kobe AD NXT FF, it can’t be bad either. The NXT FF also equips with the double density insole which is made of React + Cushlon foam though. For the vamp it is made of plastic-like woven materials. 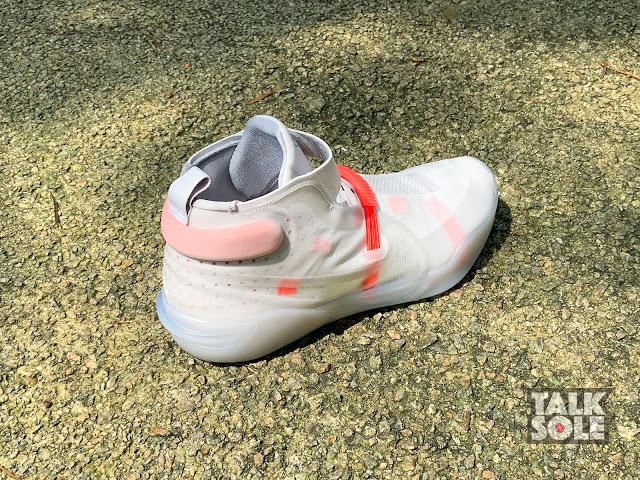 The information of these high tech alone made me rather thrilled before it was officially launched. Then in terms of the performance, I really got shocked for it performed that nicely that I can not praise it enough. The first impression it gave me was its super lightness though a bit heavier than NXT 360. Then after I tried it on, it just turned out to fit my feet perfectly. After pulling the Fastfit ring, I felt my feet locked immediately. And if you ask about the Velcro, I should say it is anything but a trouble and it is never just a decoration. It helps wrap and lock my feet but never will it stress my feet. 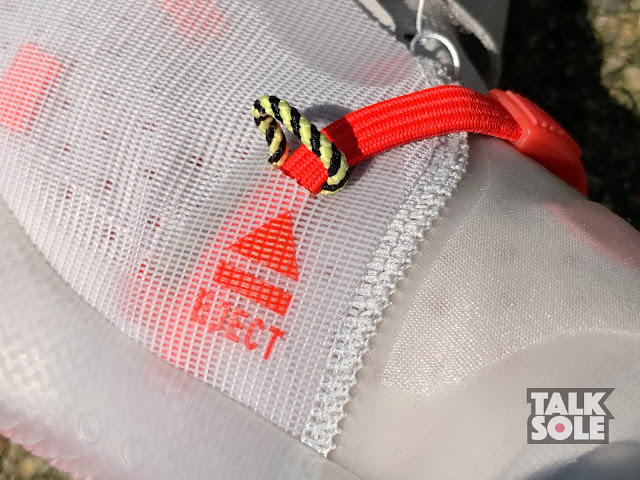 In the shoe body there is a word Quadfit, it extending outward. Due to the materials used the shoes wear very nicely and are easy for me to put on and take off. 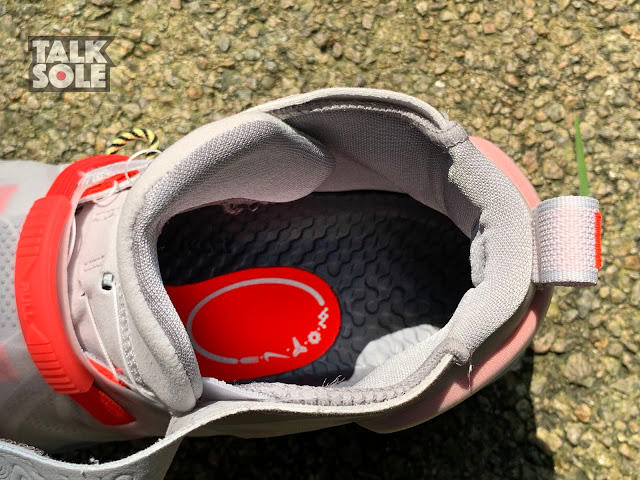 For the insole, though made of different materials, it is still nice and I do not feel anything different compared with the one made of React + Lunarlon . Because the  Fastfit System is placed inside the Cushion I don’t feel my toes stuck in the fore part. And I believe if you get a try you will be astonished at the delicate design by the designer. 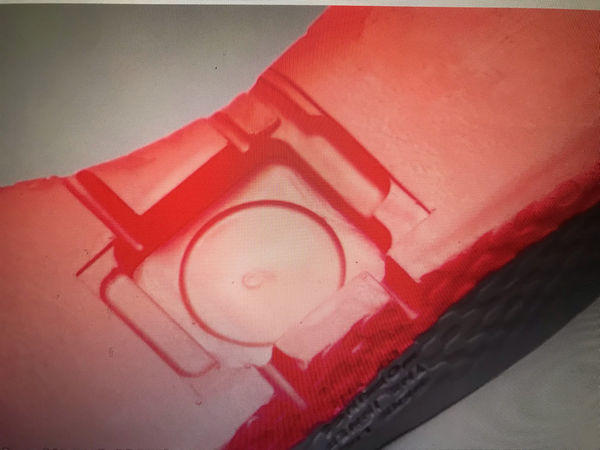 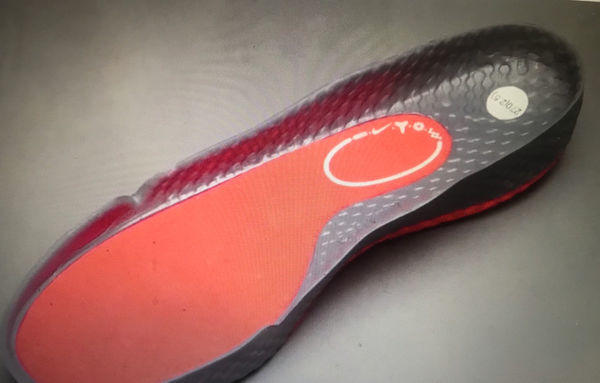 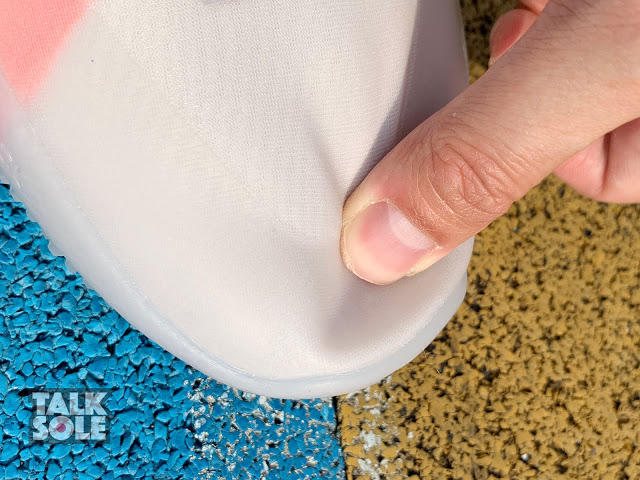 Albeit the high-top design, the fact is that its protection is not that enough whereas the wrapping is the most satisfying one I’ve ever met hitherto. And this should be ascribed to mostly the Fastfit System. 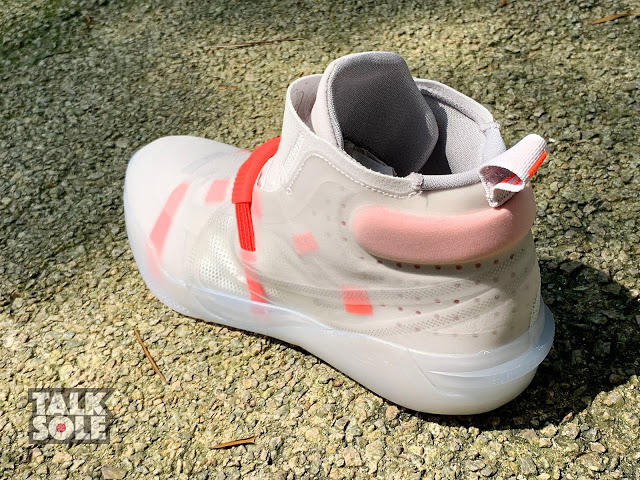 The shoe not only provides sufficient wrapping; but in many cases it responds so quickly that it can withstand the impact of the actual shock when you are combating. The Fastfit inserted inside has also anti-twisting function and the Outrigger of the forehand offers enough stability. In the process of testing the shoe there was sometimes slipping phenomenon though, but the blame lies in my style of playing. Surely there is enough protection for the guard, but often for defenders this may be a little insufficient. 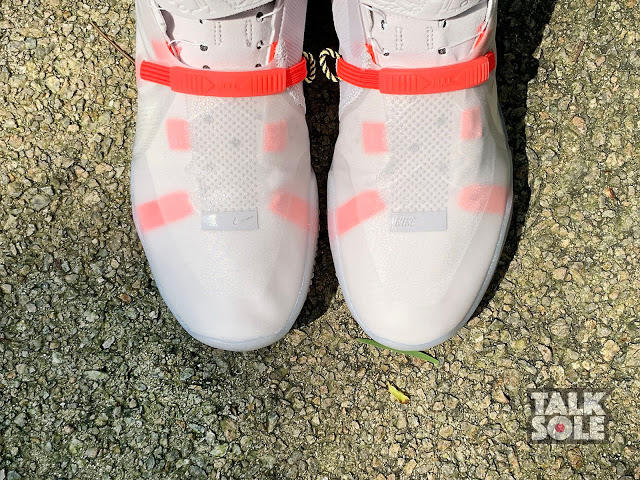 Seeing the outsole you’ll find scale granular pattern in it, which is similar to that of the NXT 360. NXT FF has a relatively dense pattern, so I had expected it to have a nice grip performance. On the court with less dust, the grip performance was an ideal one and there was no slippage in emergency stop or turning, but unfortunately, it was prone to sticky dust. However, from personal experience, the Nxt 360 performs better in terms of this respect. 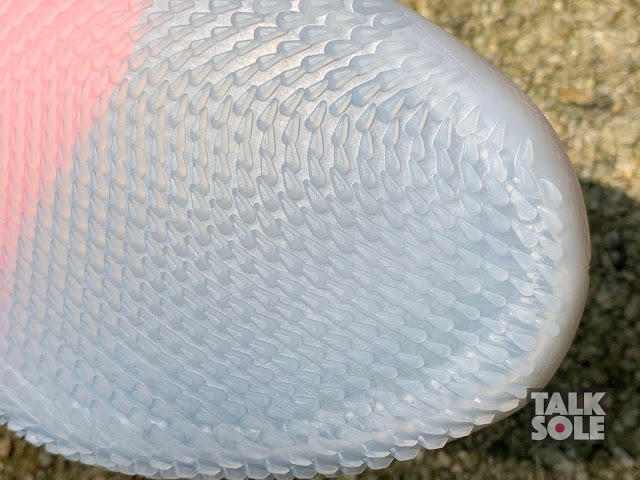 But for some the Nxt 360 may be a nightmare because of its weak durability. The Nxt 360 grips nicely, but it wears out easily as well. But after several tests, Nxt FF still remains intact. So if you don’t want to change your partner frequently, Nxt FF  may be a good choice. 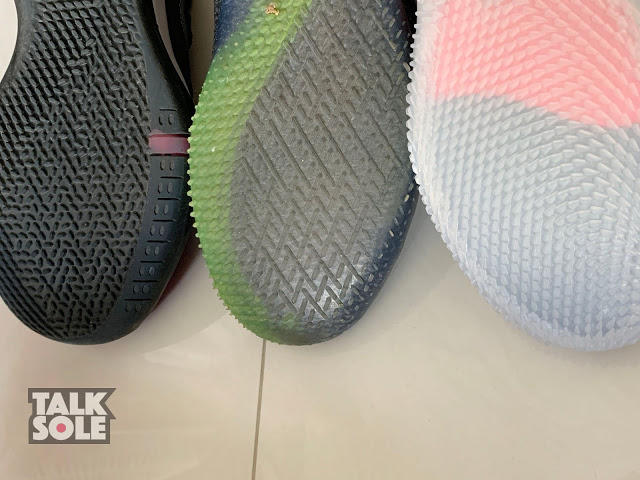 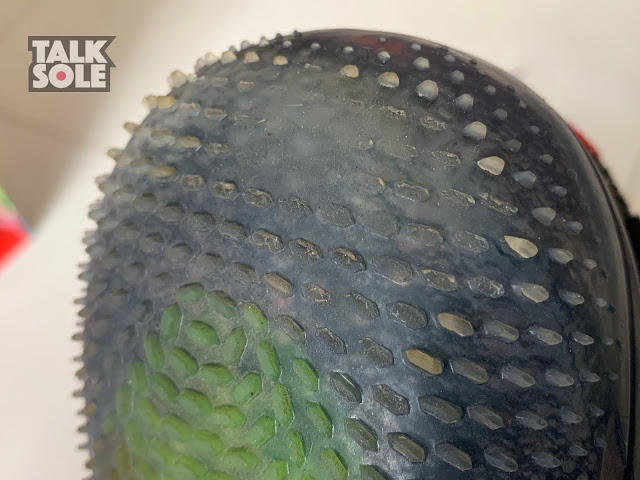 In the past years, as can be seen that Kobe series has always been coming up with comfortable, responsive shoes. And from my point of view, Kobe AD NXT FF is the result of its efforts. Based on the ground of my experience, you might as well have a try.