The ‘White Cement’ Air Jordan 3 was originally released in 1988, and the first retro release came in 1994. Fast forward to 2003, Jordan Brand retrod the pair again, but this time the Nike Air was replaced with a Jumpman logo. Once again, we saw the pair launched in 2011, which also used the Jumpman branding.

In 2013, we saw our first sign of the OG return, although not 100%. The ‘White Cement’ aka ’88 Dunk Contest’ featured Nike Air branding on the heel, but ‘Jordan’ is written on the insoles. If the name doesn’t announce it, the pair pays tribute to Michael Jordan’s infamous free throw line. The last time we saw the pair release was in 2018 and known as the ‘Free Throw Line’, another tribute to the 1988 Dunk Contest. This pair features Nike Air branding and a translucent outsole with a Red line for the Free Throw line.

For 2023, this Air Jordan 3 will come dressed in Summit White, Fire Red, and Cement Grey color combination. This pair will come like the 1988 pair, including Nike Air branding on the heel and Nike branding throughout. Connecting to the ‘Reimagined’ theme, it will have an aged/vintage finish with the midsole and other areas Yellowed. Each pair will come housed in special packaging and will be available in full family sizing. 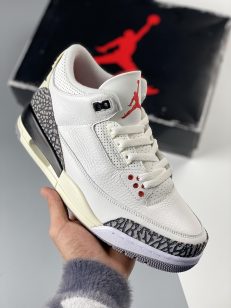