the upcoming retro has quickly garnered criticism for resembling – at least in initial mock-ups – 2017’s “Baron” colorway of the low-top Air Jordan 11. And we see where the “Internets” is coming from: the shoes’ top-half is dipped in a tonal “Black,” albeit ostensibly composed of varying materials. Akin to the high-top iteration of the “72-10” style, which commemorates the Chicago Bulls’ 1995-96 NBA championship season during which the team had a record-setting regular season, sole units are left to a contrasting, but simple “White” midsole and clear outsole combination. While not included in the unofficial sketch of the Jordans, it’s likely branding on the tongue and heel will opt for “Varsity Red” flair like its taller counterpart. 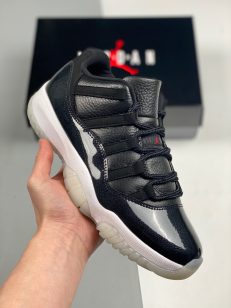