As a senior fan of Jordan for many years I am always looking forward to new models to be released by Air Jordan. But the fact is that I will not rush to a decision to buy a new model, but after some time’s consideration I might “take a plunge” if the shoes are found to be suitable for me. I believe that only I myself know what really suits me most, so I won’t follow the trends blindly. As for the newly launched Air Jordan XXXIV PF, I am gonna to tell you that after some time “looking into” it, here are some details I found. Go on checking then. 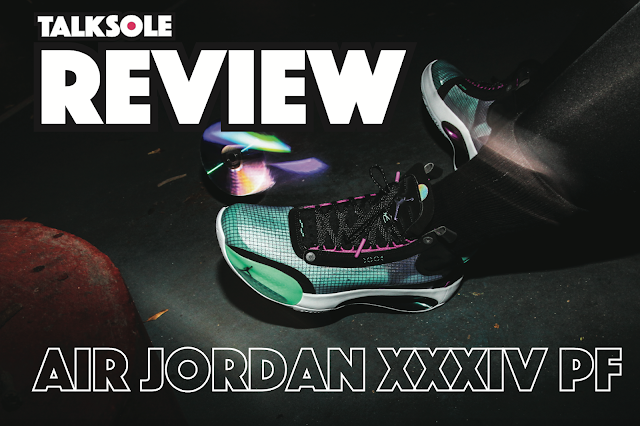 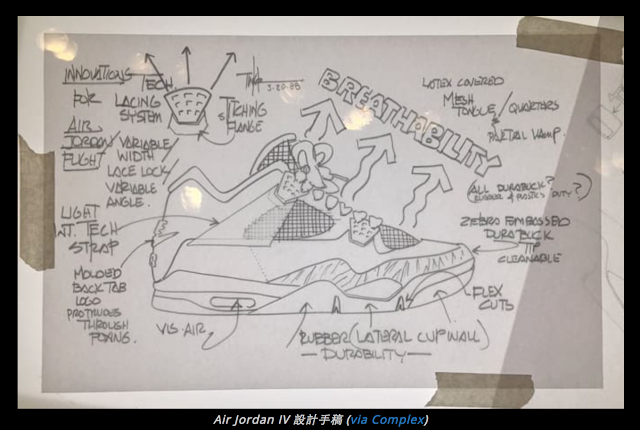 The design inspiration of AJ 34 comes from racing cars. Those familiar with the F1 racing cars know that the cars tend to use less material to reduce the weight of the vehicle and it is the concept that Air Jordan also uses when designing the shoes. AJ 34 has been injected ECLIPSE PLATE tech to  replace the obsolete  FLIGHTSPEED. And the midsole also equips with separated ZOOM AIR in the fore and rear part whereas the upper is made of crack resistant, lightweight and translucent nylon material. All of these demonstrates that Air Jordan has tried its best to implement this concept. With the exception of implementing the concept you might also find some elements and details of the Air Jordan IV, which hands down the essence of Air Jordan. Here are some pictures of AJ 34 and AJ IV. 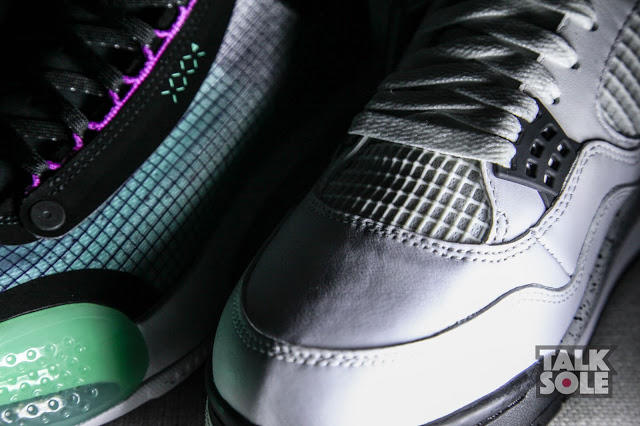 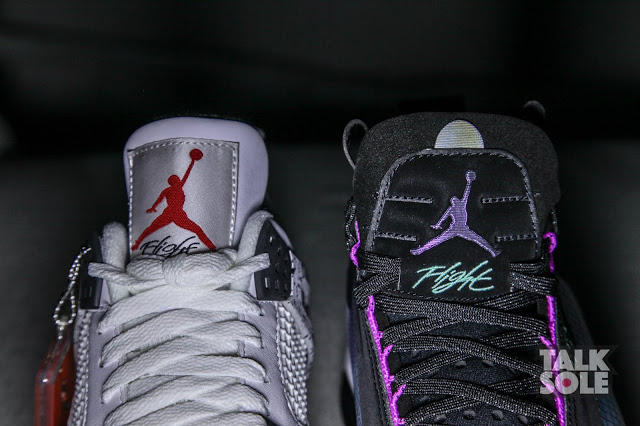 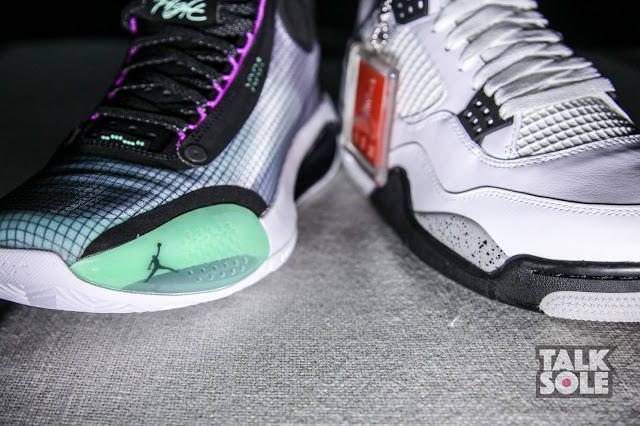 AJ 34 retains the classic elements of this series; that is keep the classic FLIGHT of AIR JORDAN IV on the original place. 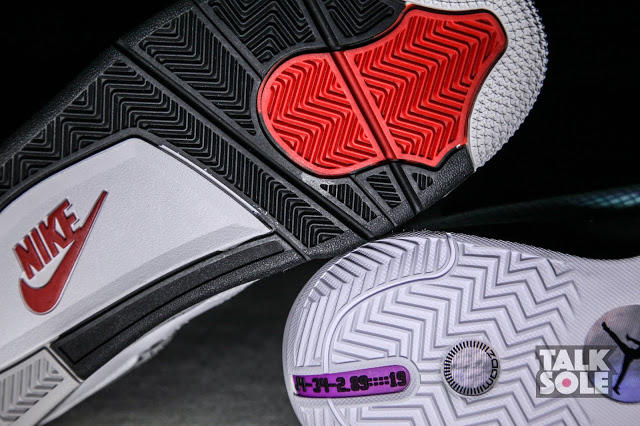 The midsole is designed with the addition of an anti-rollover TPU. And you can also make a comparison of different outsole patterns between the two editions. 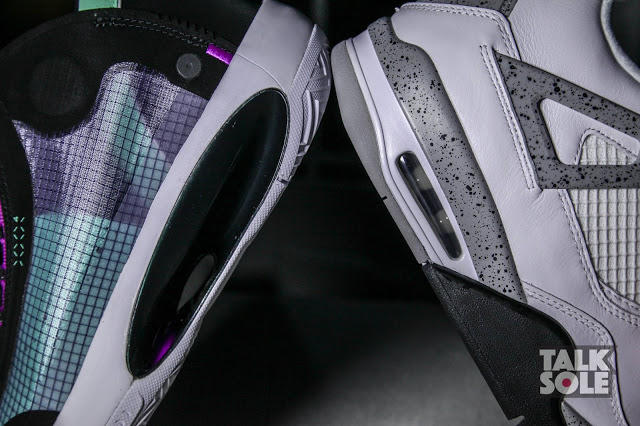 The void design in the sole, from my perspective, is quite a nice and necessary design of Air Jordan shoes because it reflects the other concept of this series. 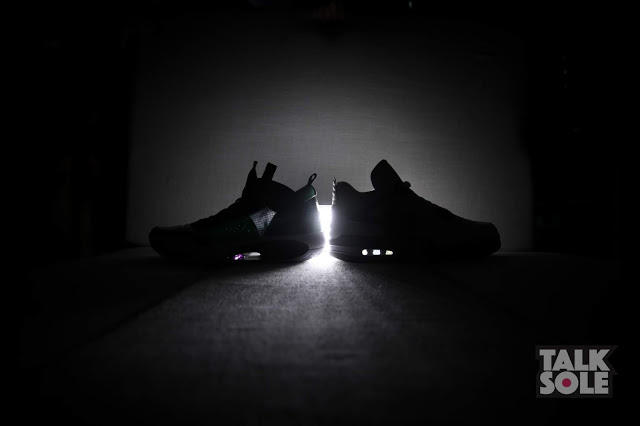 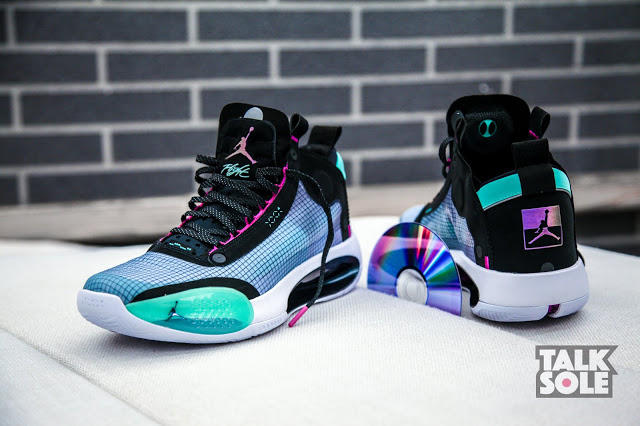 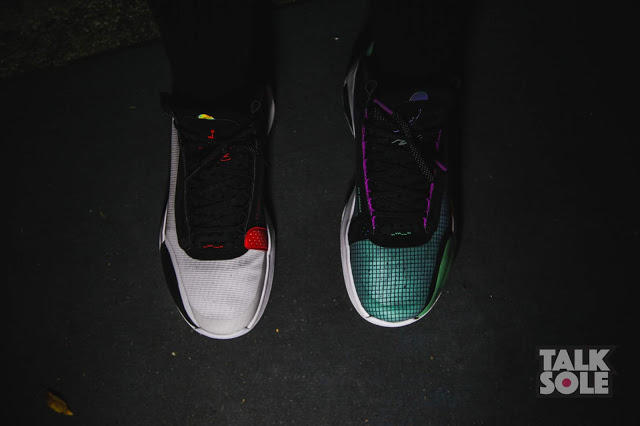 The first released colorways, Blue Vuid/Wroop, might look somewhat weird at the first sight. But I think maybe the designer means to leave some more room for us to imagine. In the shoe tongue and at the heel there are corresponding themes of different colorways. 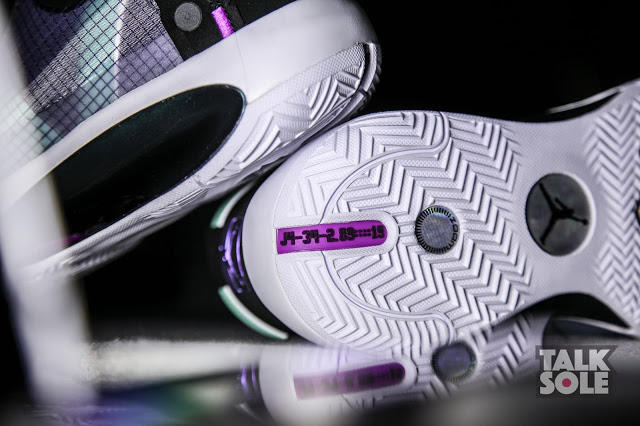 For the record, notwithstanding the different colorways of  AJ 34 shoes, the materials adupted for the vamp vary but the performance remains the same. 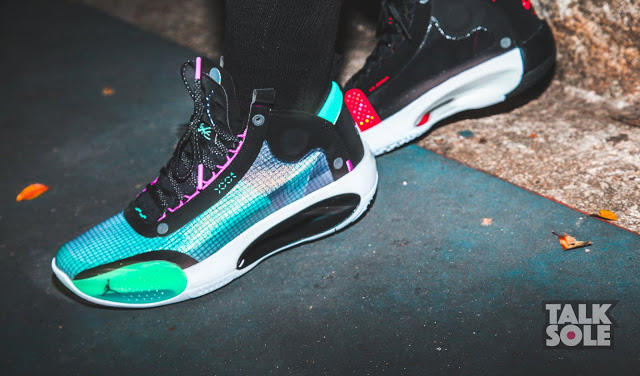 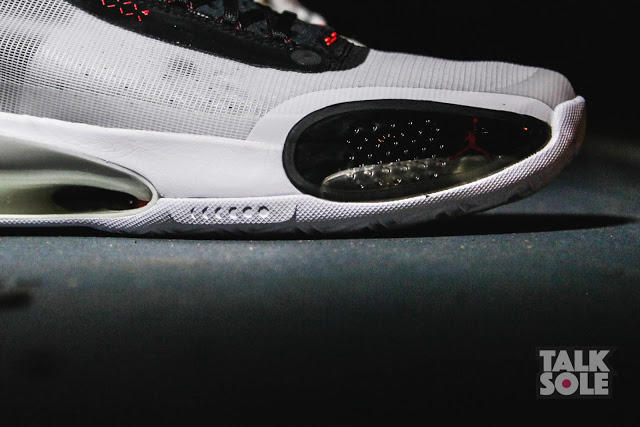 The pattern on the outside of the outsole reflects the “ECLIPSE PLATE”. 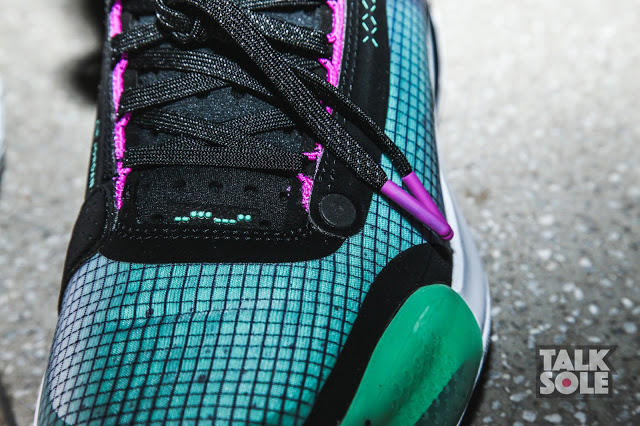 Chances are that you have found the small dots in the shoe laces, which are like screws on a racing car. 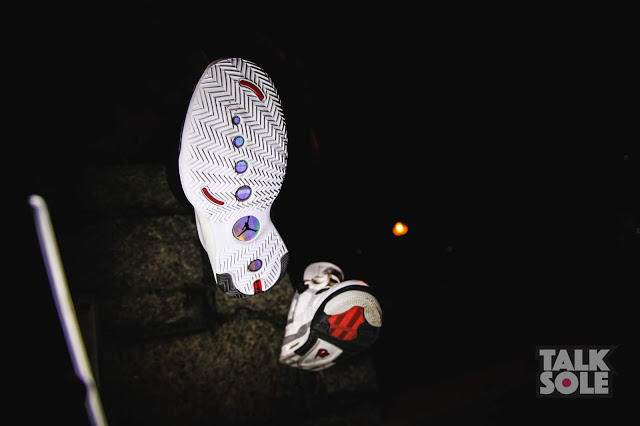 Apart from that, the outsole is worth our notice. You can see that the circles on the outsole range from small to big , which does correspond to the process of solar eclipse. And a ZOOM AIR is also written in each circle, indicating the area covered by ZOOM. 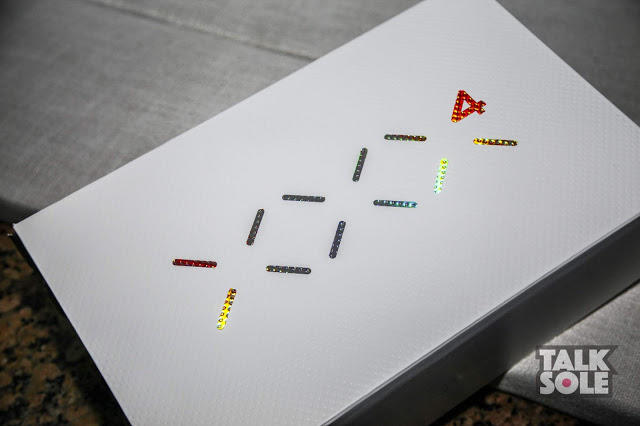 In terms of the external decoration, the shoe box, I am quite obsessed with it. The Air Jordan XXXIV PF elegant drawer-type pull box design coupled with the uniqueness of virtually every respect gives me quite a kind of anticipation. 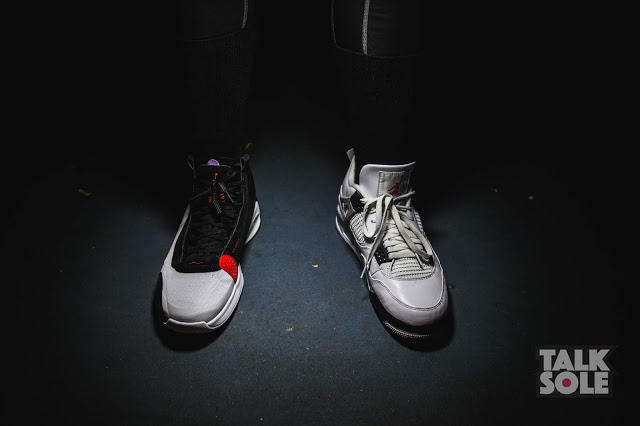 After being improved AJ 34 is significantly much easier than the previous version to put on and take off. For the particularly thin upper some may be suspicious of it and doubt whether it can wraps their feet. However, surprisingly thin as the vamp is, it wraps nicely and supports you perfectly. 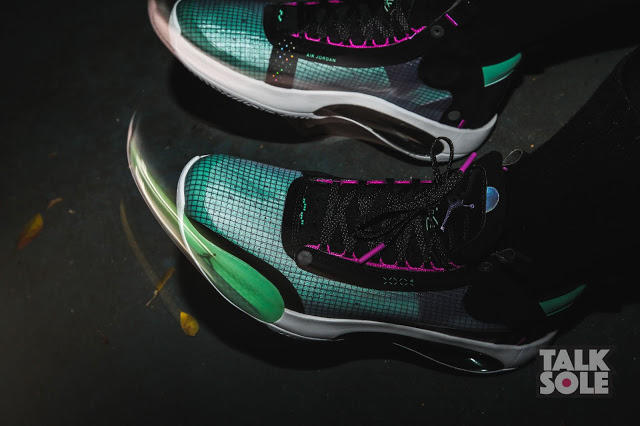 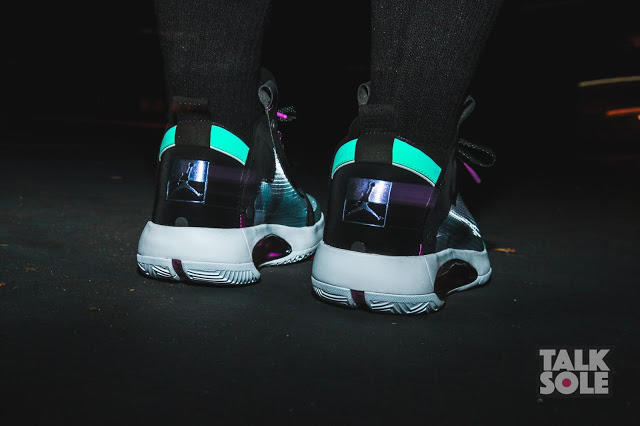 Its translucent design can be seen through the heel and the thick foam adds a lot of support for the wearer. Personally, I myself prefer this part to others because I pay more attention to the thickness and stability of the heel of basketball shoes. The case  is that if something part of the shoe persuades me into buying it, it must be the excellent setup of the shoe’s support. 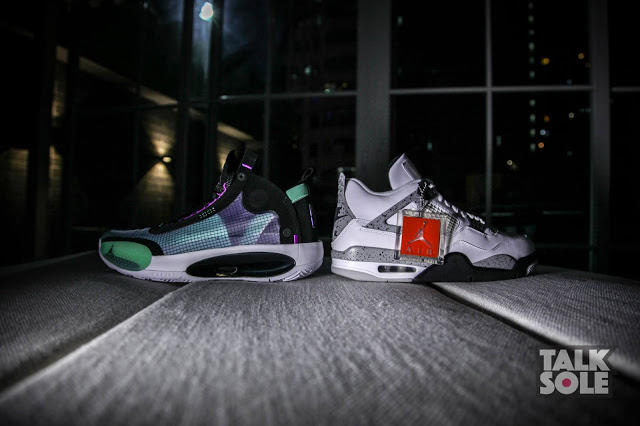 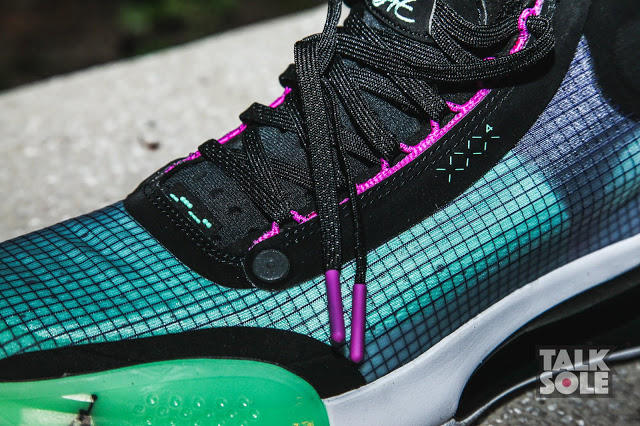 For wide footers and high instep ones and those fond of wearing thick socks, I recommend you pick a bigger size. 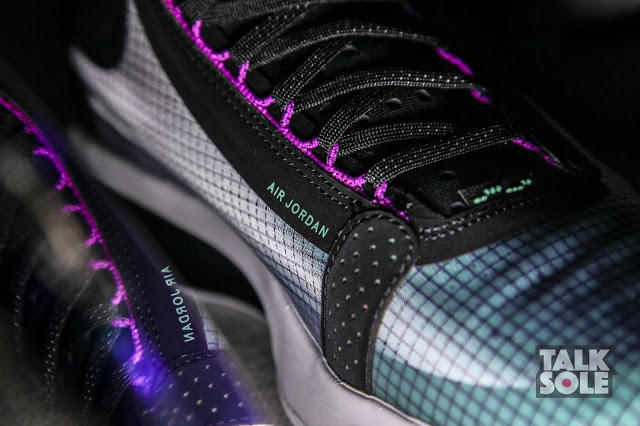 The AJ 34’s shoelaces is somewhat similar to that of KD 12 in design, but the former will loosen easier so that you have to tighten the shoelace from time to time, which is bothering. 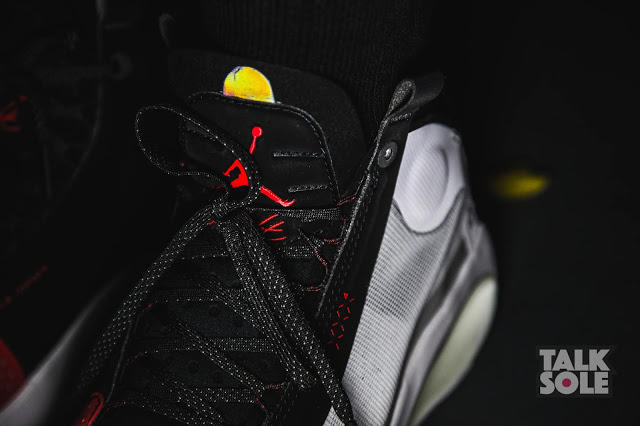 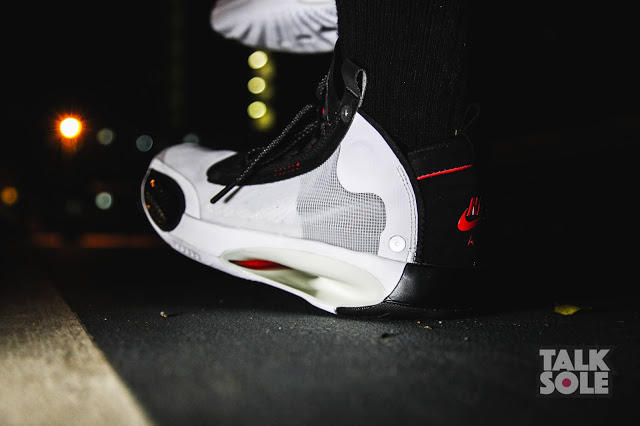 Small details have also been added so as to increase the upper support and durability, say, the synthetic leather added to the inner seam of the shoe and the transparent fabrics added around the body especially the toe part. 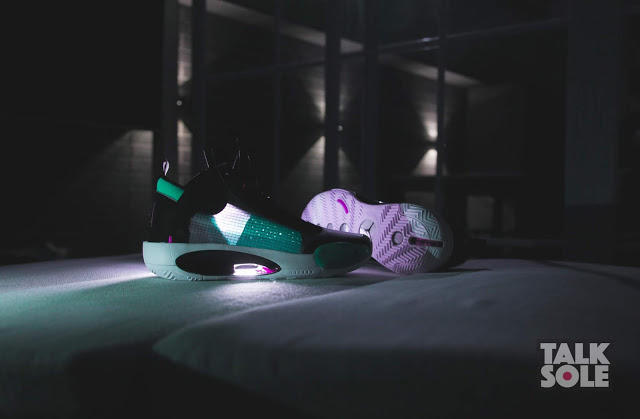 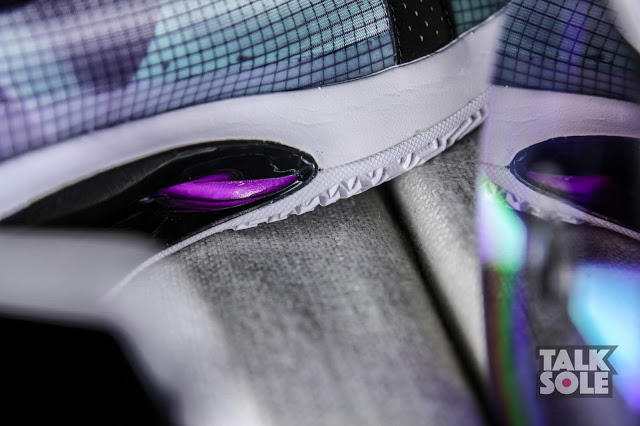 The striking ECLIPSE PLATE tech in midsole consists of TPU and PEBEX. In addition to reducing the weight of the midsole, it brings good stability and torsion resistance. However, in the process of getting used to it you may feel pressed in the toe. But you will fare well with it some time later. 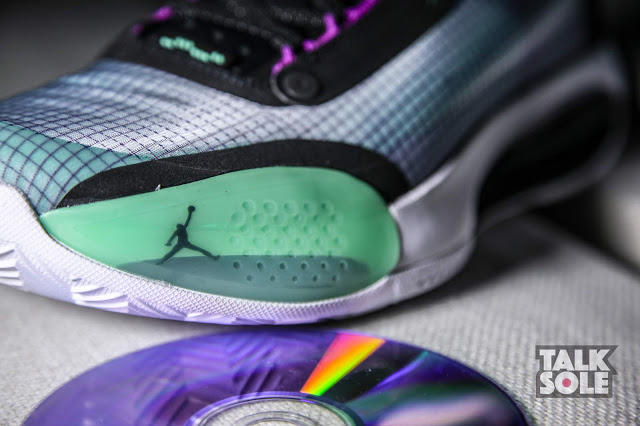 Before you begin your match the forefoot ZOOM AIR also needs warming up so that you get the resilience  of that setup. 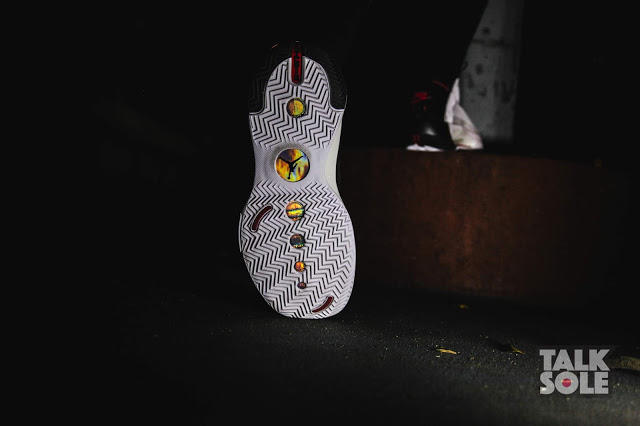 The sole is designed with the traditional herringbone pattern, presenting an image that diffuses outwards. Made of XDR material you can expect something of it. This time I tested them on outdoor concrete and indoor wooden floors but the grip was no better than I had expected.  However, in most cases it performs not that bad and I think it is enough for most players. 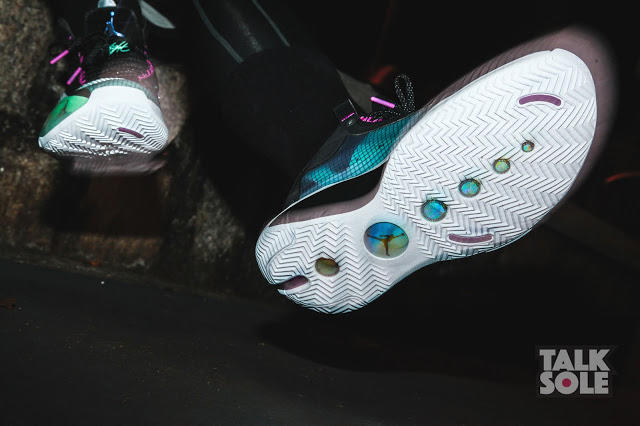 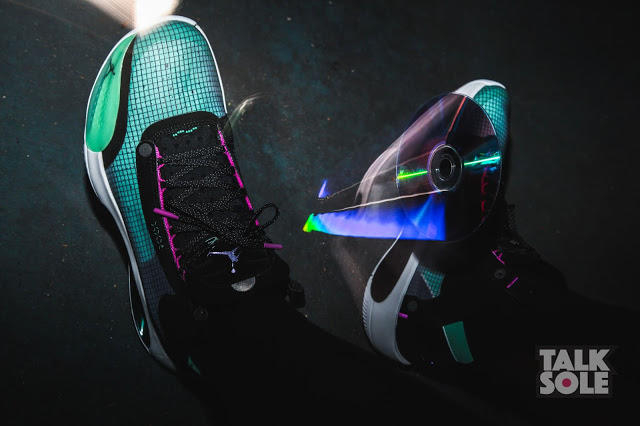 If you are considering this Air Jordan XXXIV PF at the moment and still can not make up your mind, you may as well go for more details.  All in all, my experience with this one is not bad and above all, among my basketball shoes,  their supporting is just so so, none more so than that of AJ 34.