Previously seen on models like the Air Force 1 and Air Jordan 1, the anime-inspired series of Nike’s own fictional characters now leans on the Nike Dunk Scrap in a kids-exclusive colorway. Here, its intergalactic theme is set first from the insoles, with “The Battle of Dimension Six” setting the scene — and cleverly tying itself back to Nike’s heritage. On the exterior, a white leather and mesh upper hosts a slew of 8-bit stitches, blocky flame Swooshes, and a silver tongue plate complete with red Checks that are seemingly pulled directly from the chest plate of Swoosh Man. Its overlays arrive in bone and black, with accents of orange and yellow fluttered throughout to complete the design. 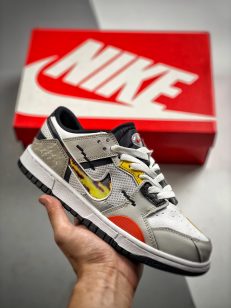