As the model enjoys the second-half of its 37th anniversary, it’s joined Nike Sportswear’s commemorative collection for debuts (the Air Force 1 has recently appeared in several ensembles stamped with “‘82” branding). A shortened form of the Nike Dunk’s launch year replaces traditional logos at the top of the tongue, as does wacky “NIKE” text at the back. Dual profile swooshes also appear on the off-white and green-covered sneaker, further denoting the offering’s special characteristic. Underfoot, the Air Jordan 1-reminiscent sole unit maintains the upper’s mostly-two-tone arrangement. 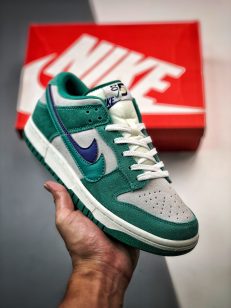