Originally released in 1988 as one of the original four releases of the Air Jordan 3 that also included the “White Cement”, “Black Cement” and “True Blue” colorways. The Air Jordan 3 “Fire Red” retro’d back in 2007 and 2013, both featuring the Jumpman logo on the heels. For 2022, the “Fire Red” Jordan 3s will finally be released in OG form featuring the Grey-on-Black elephant print and OG Nike Air on the heels. 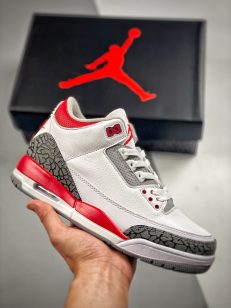