Many guys are interested in the new released Air Jordan 36. AJ36 uses more air cushion than AJ28. And the vamp of AJ36 is about 33% lighter than AJ34 vamp. The gold line of AJ36 is to salute to AJ6 insole. 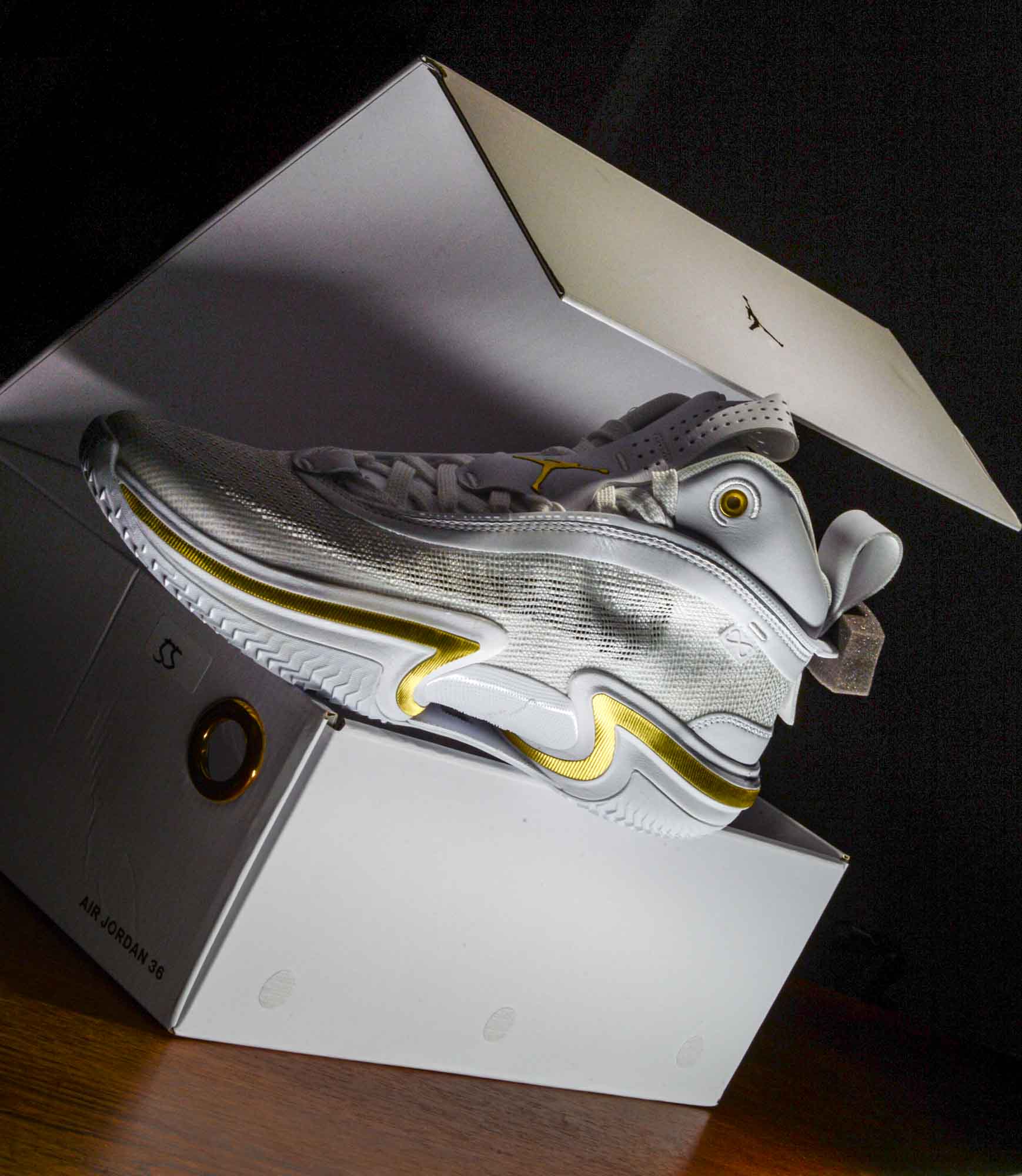 The vamp of AJ36 is made by Leno-Weave techology which twist two pieces of longitudinal warps and traverse horizontal warps to constitute the jacquard weave. The Leno Weave vamp can satisfy the high intensity request of support, fitness and air permeability. 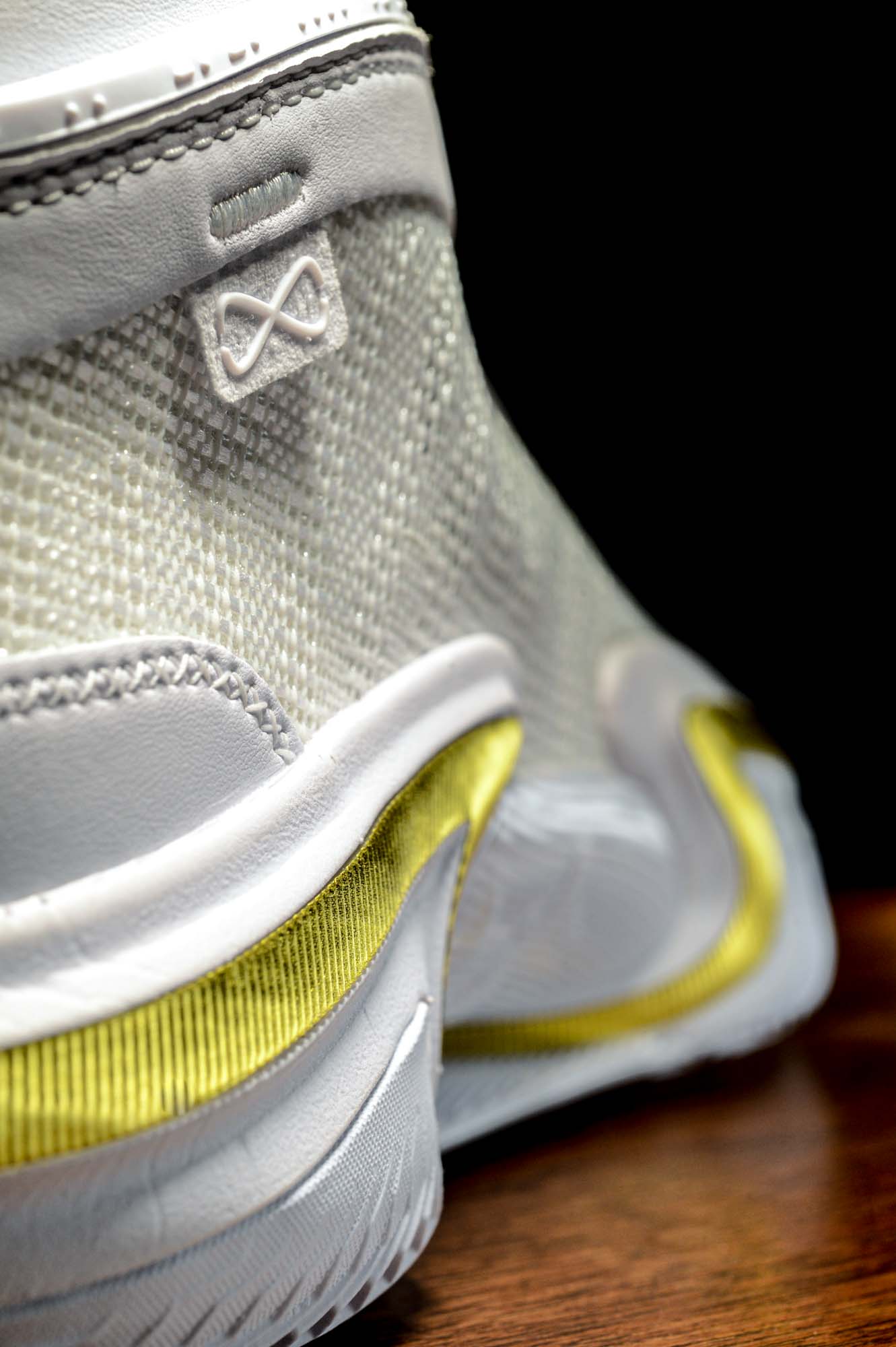 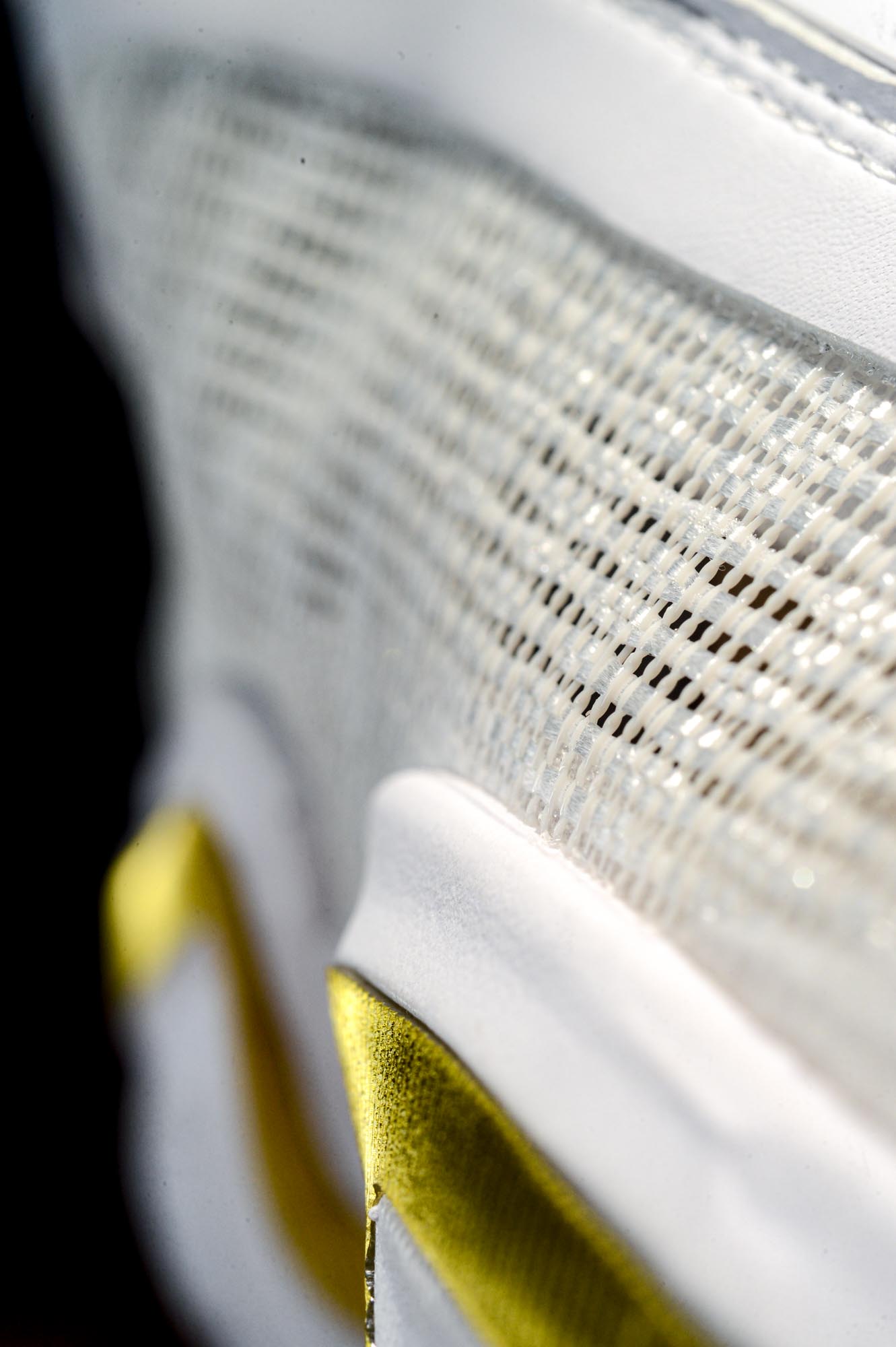 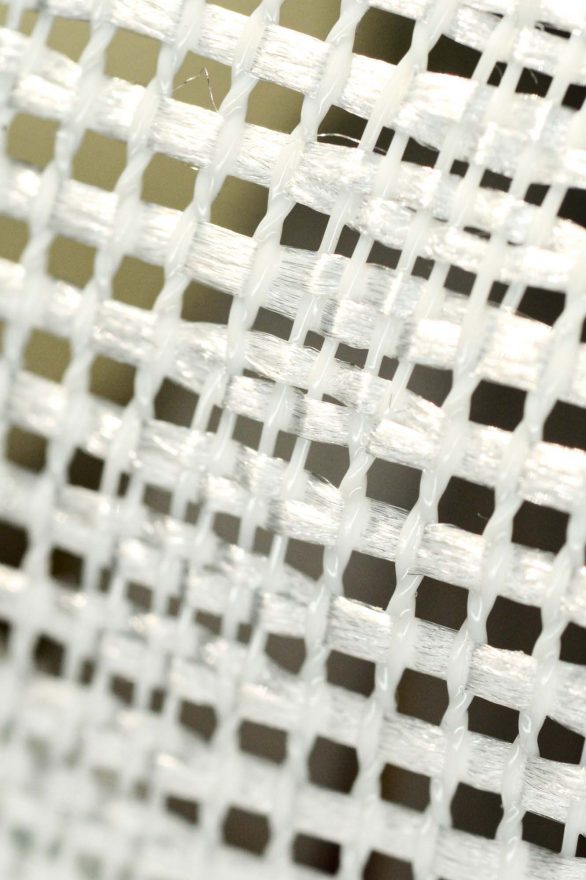 The structural hierarchy around the ankle is evident. There is a piece of TPU plate around the shoelaces and shoe heel, which salute to the design of AJ6. The big pull-tab on the shoe heel is convenient for putting on and taking off, and it’s printed with NIKE AIR logo, Jumpman logo and 36. 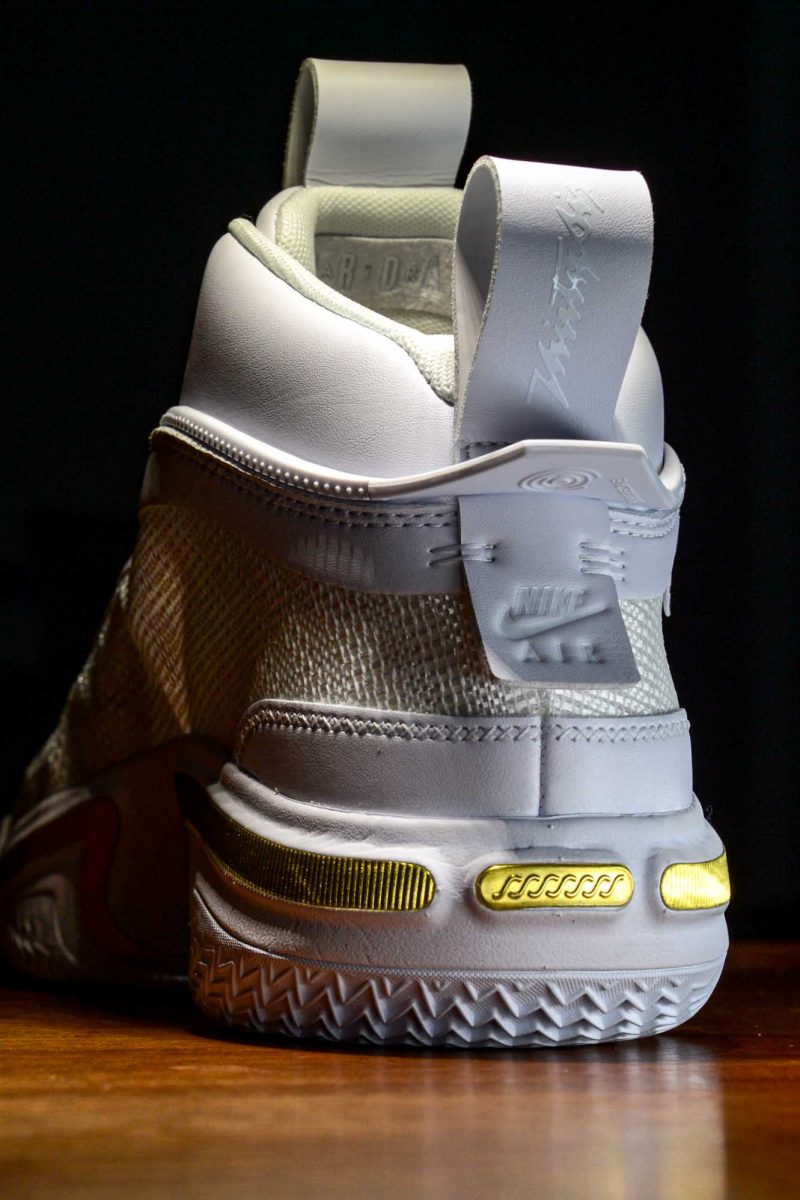 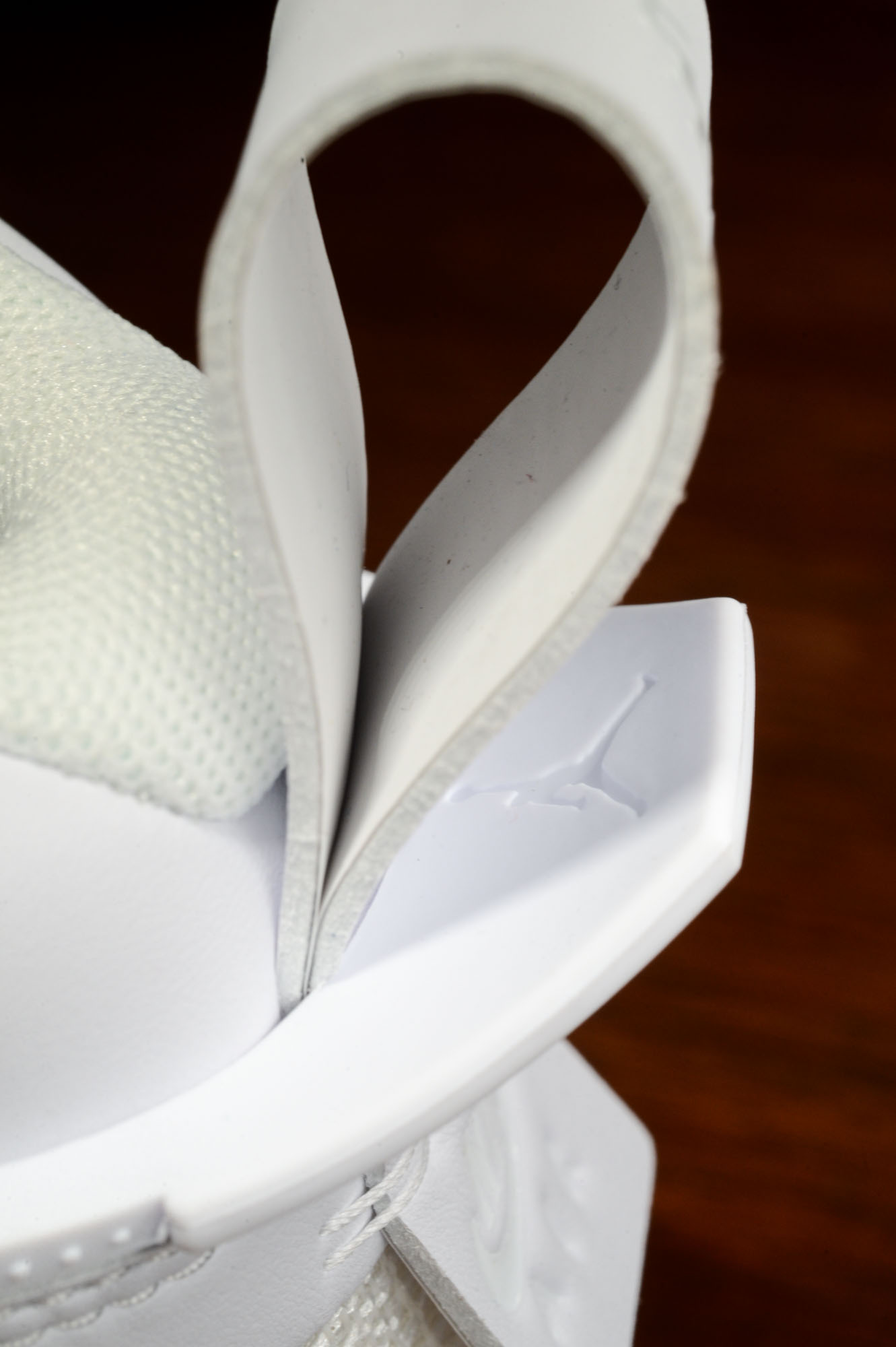 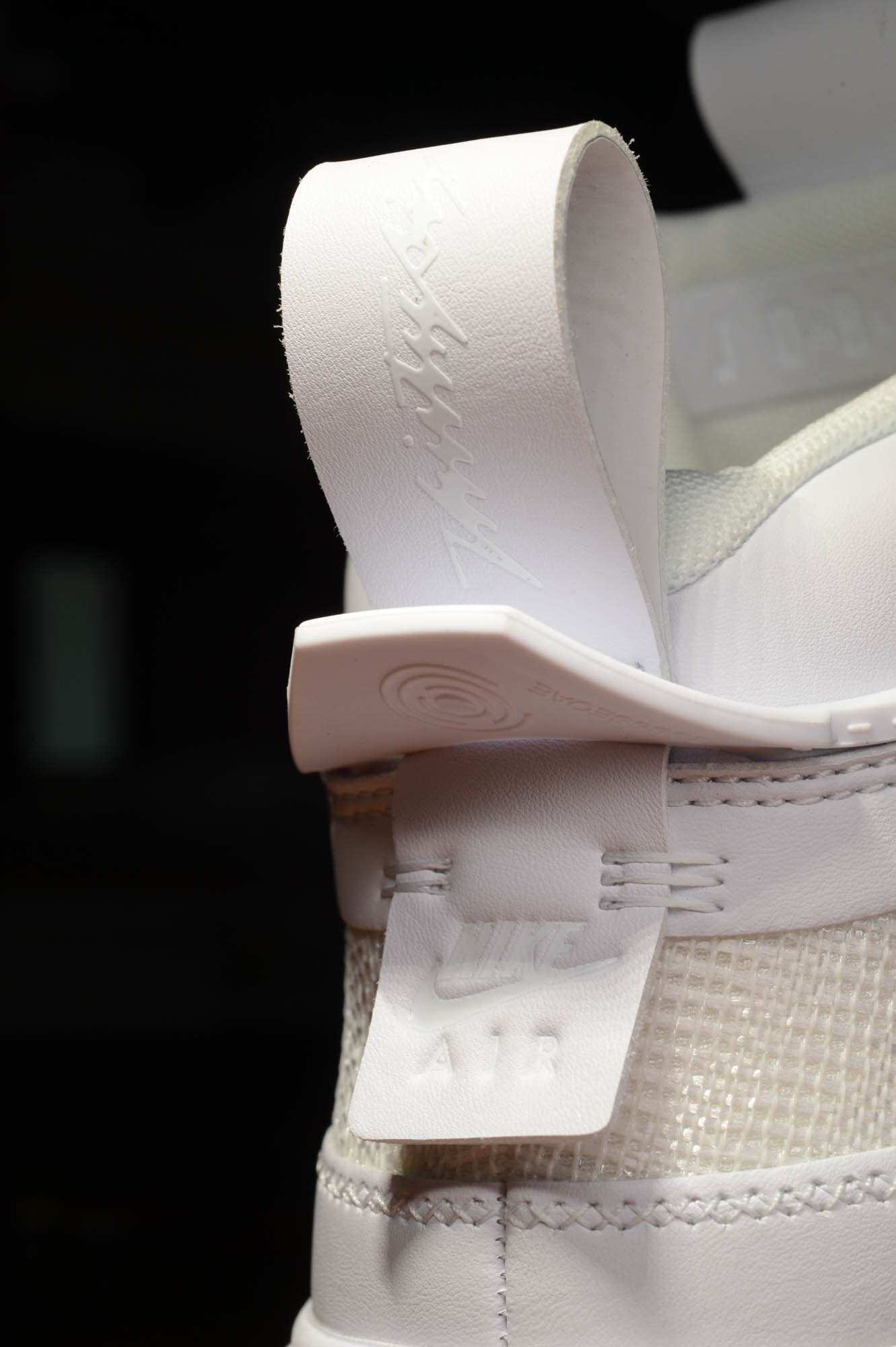 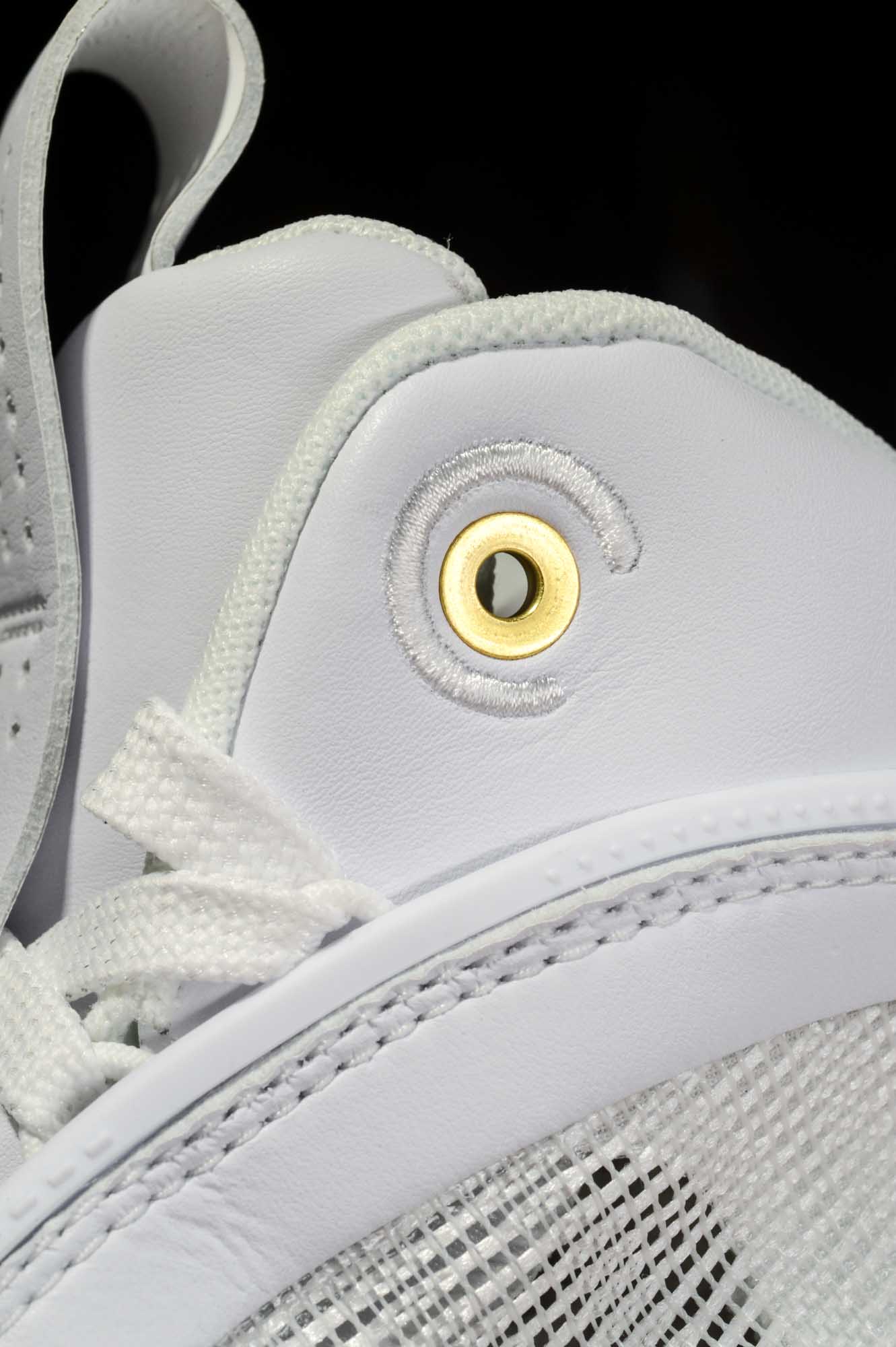 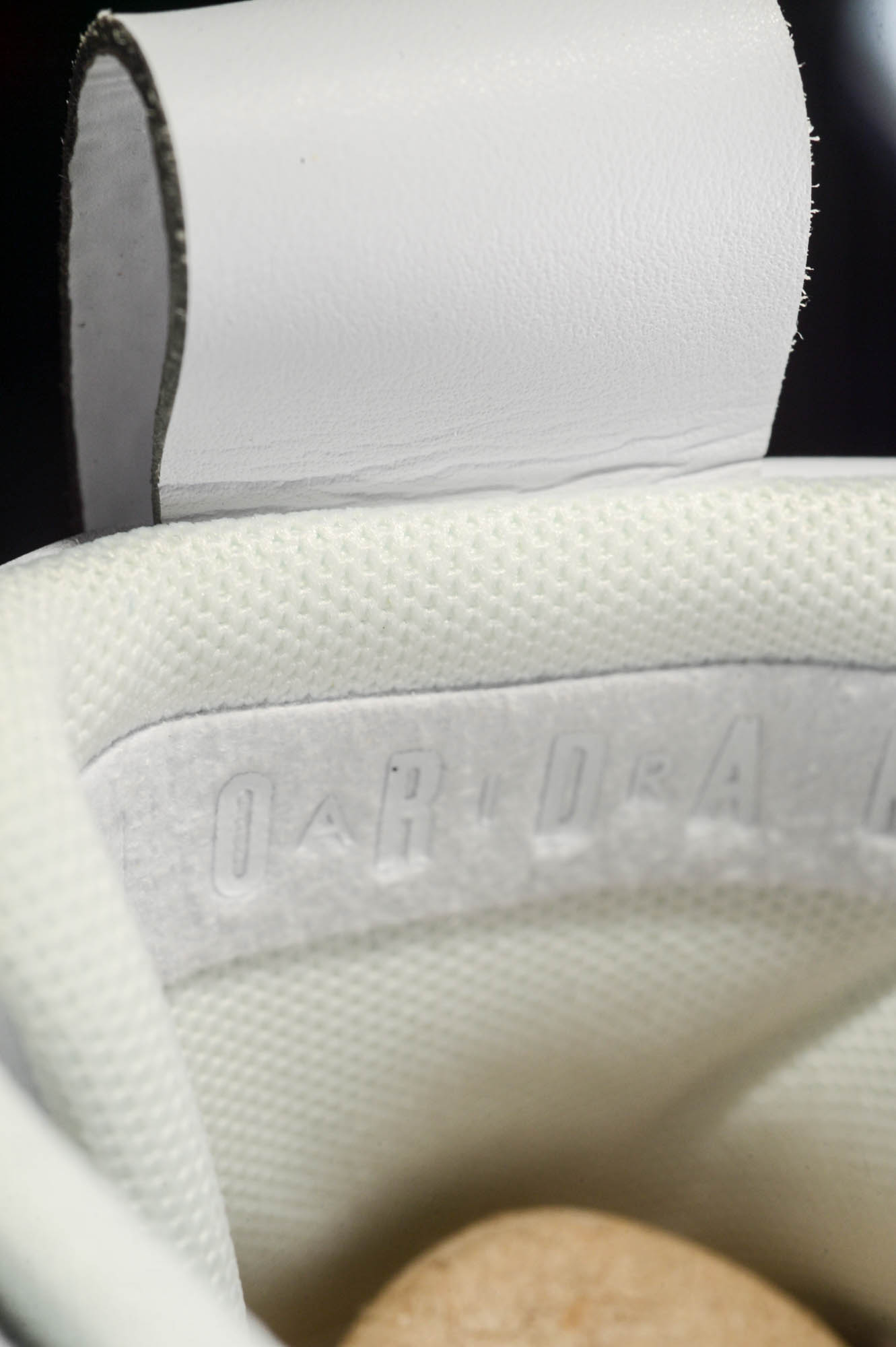 AJ36 uses the Eclipse Plate structure. There is a hollow-out design on the insole, and there is a piece of stabilizer wings piercing in it. 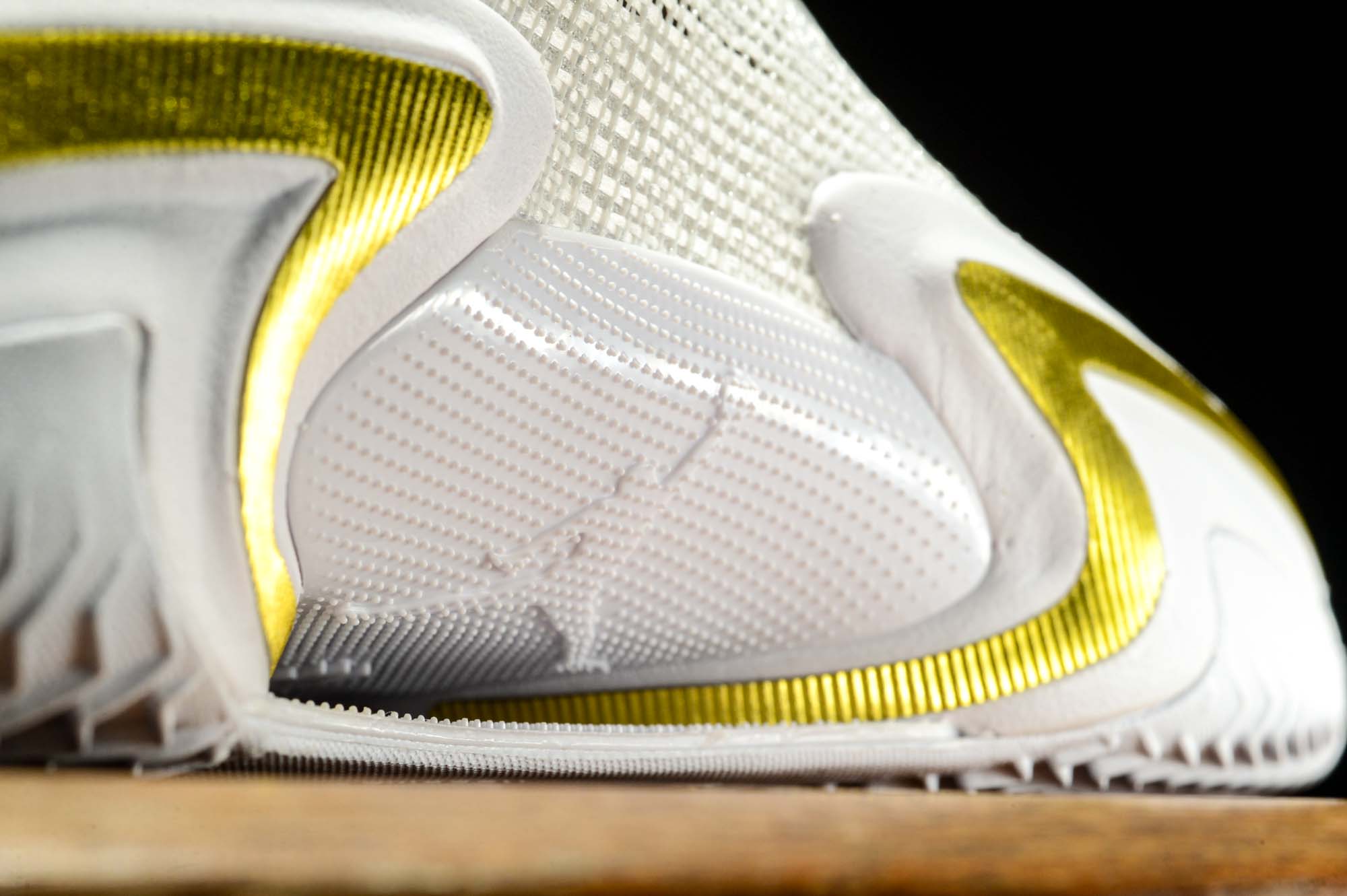 AJ36 is also designed by Tate Kuerbis who is also in charge of AJ34 and AJ35. AJ34 and AJ35 also uses the Eclipse Plate structure. By using the design of Eclipse Plate, AJ36 realized the aim of biggest Zoom Air cushion and lightweight. 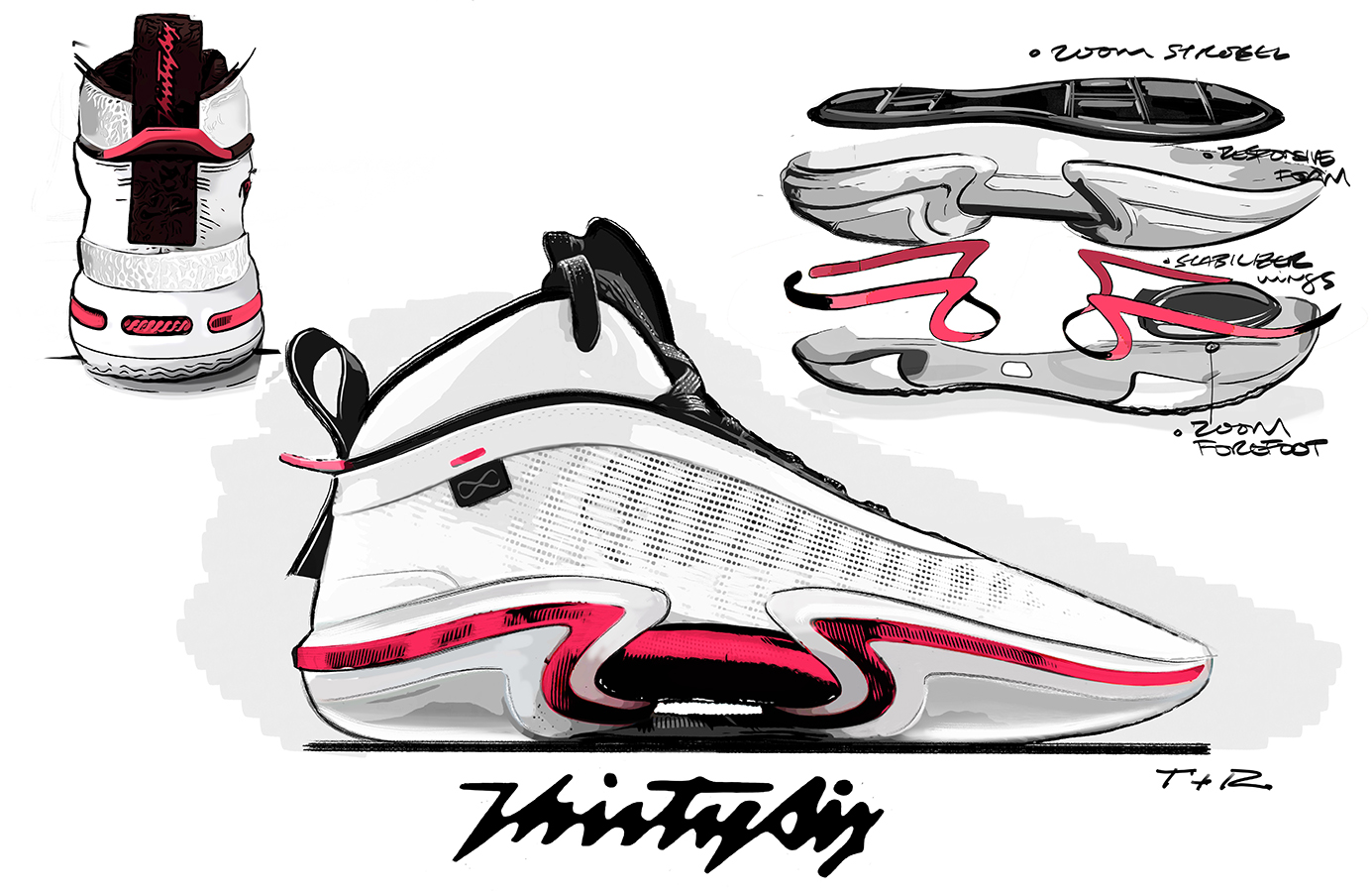 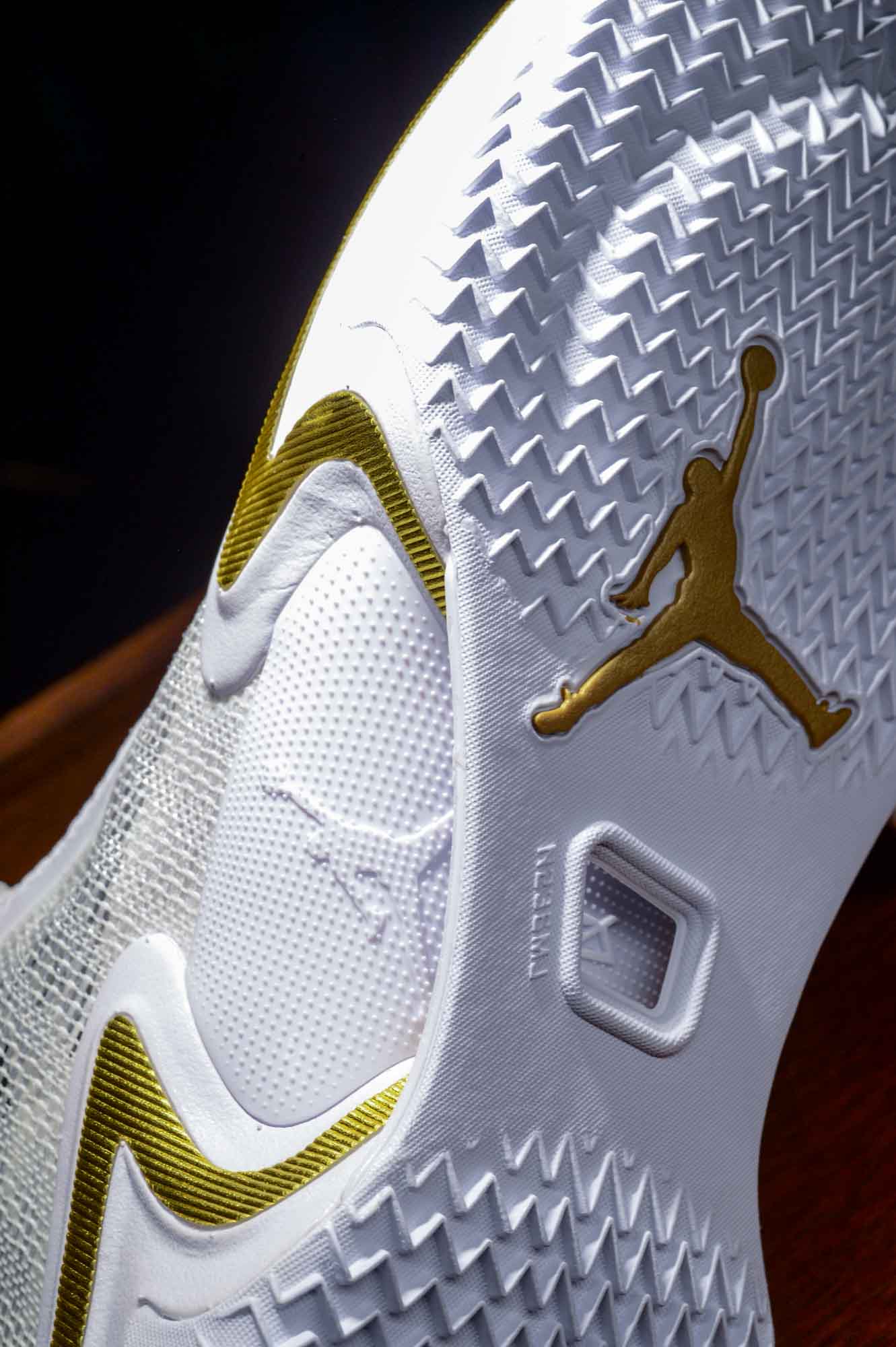 The dense herringbone pattern is the guarantee of traction performance. The gold Jumpman logo comes from the element of AJ6. From the hollow-out design of rear sole, we can see the ZOOM Air cushion. 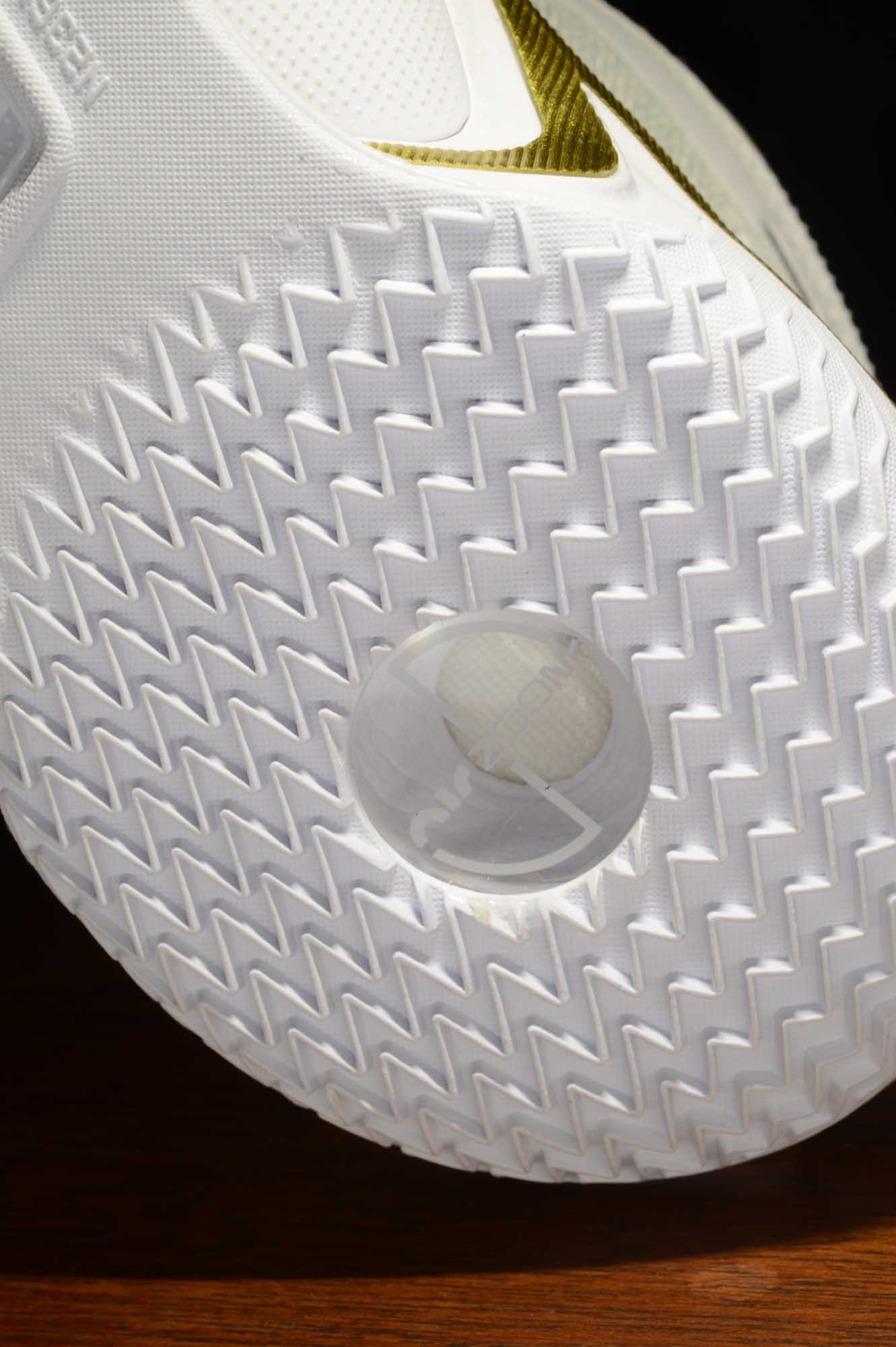 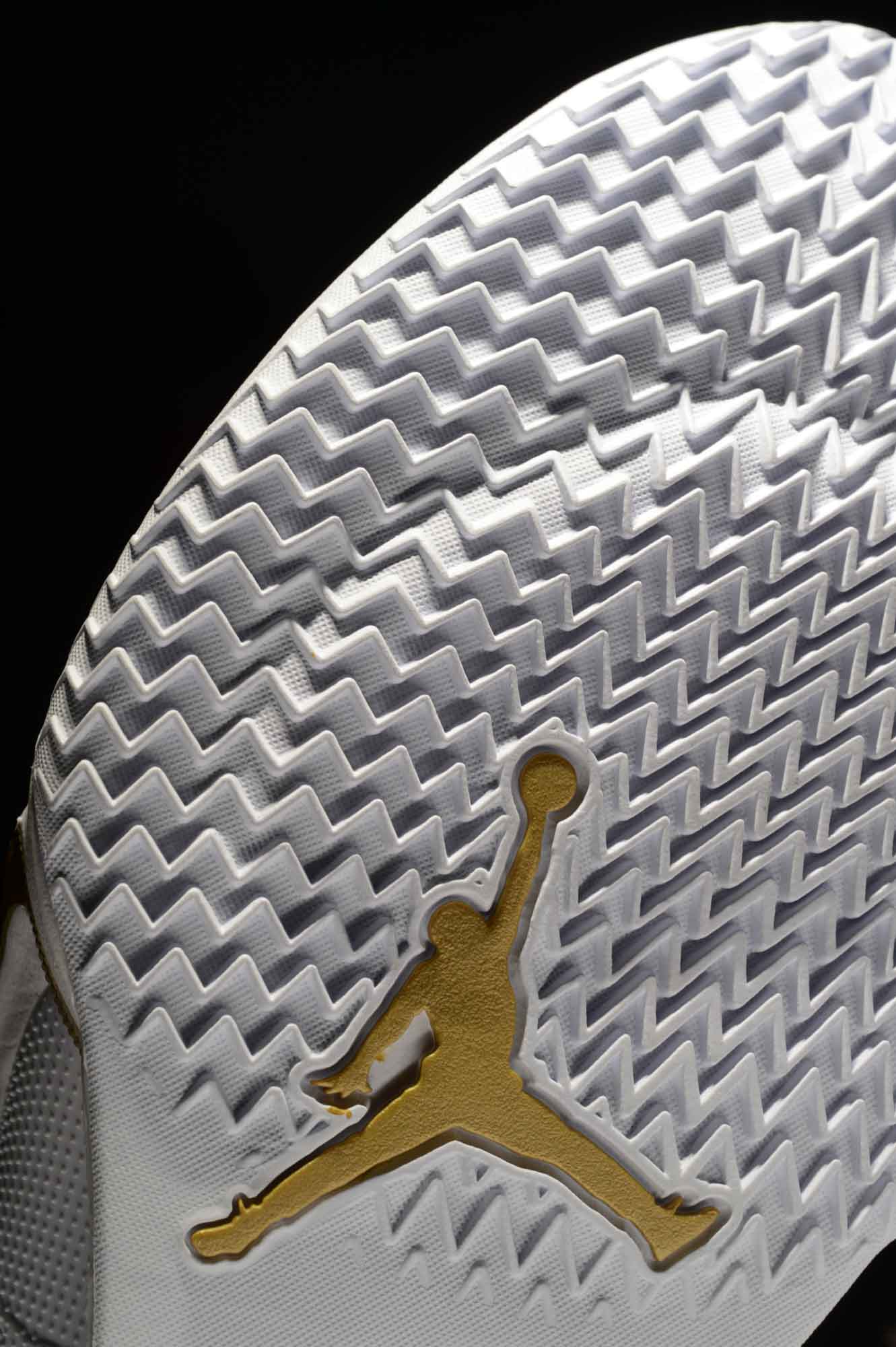 From the front side, we can see the outrigger design on the forefoot of AJ36. The outsole has prominent Zoom Air cushion. 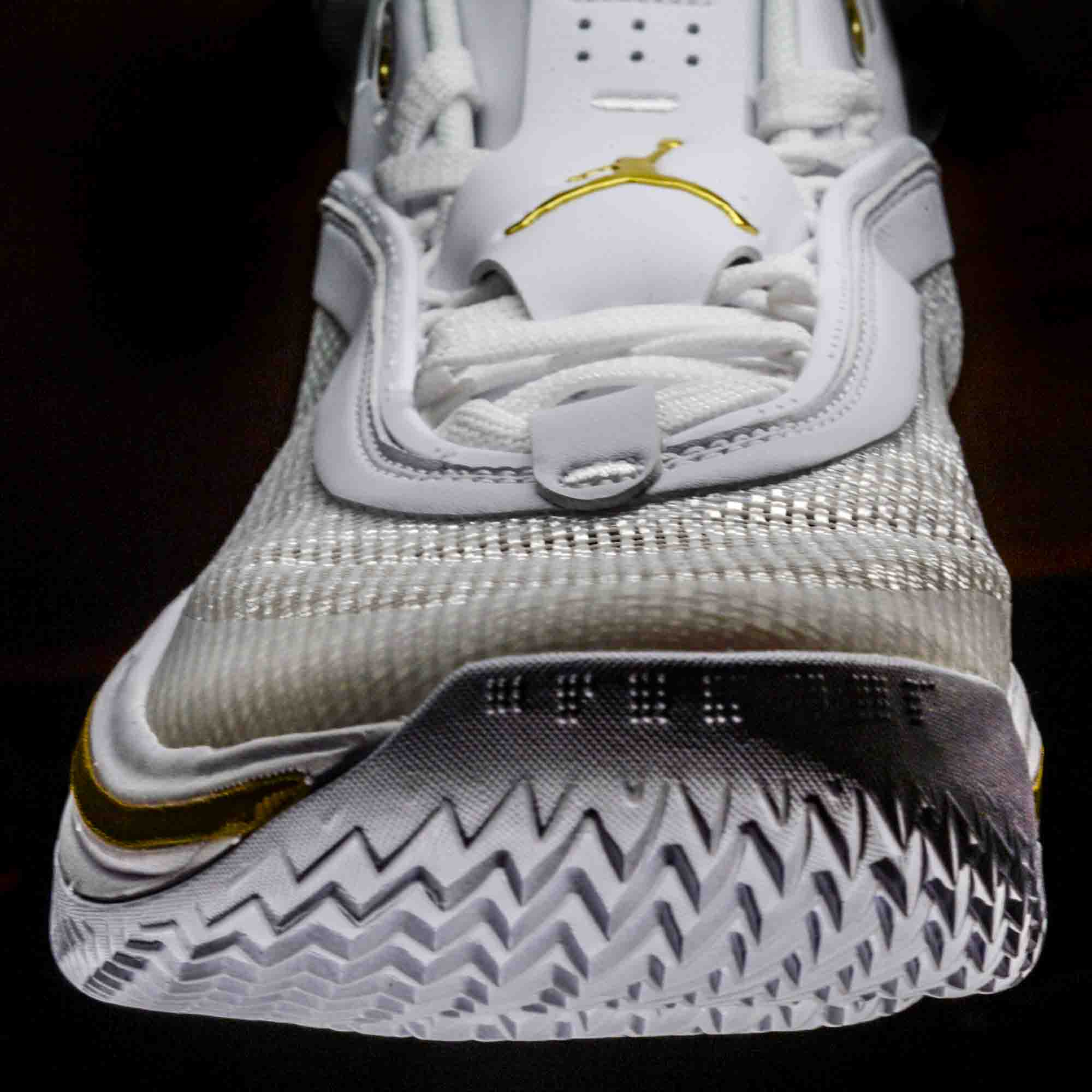 The leather above the shoe tongue of AJ36 has the function to fix the shoe tongue. The white and gold colorway AJ36 is named as GLORY. The shoe-pad is printed with colorful pattern, but it doesn’t punching design like other colorways. 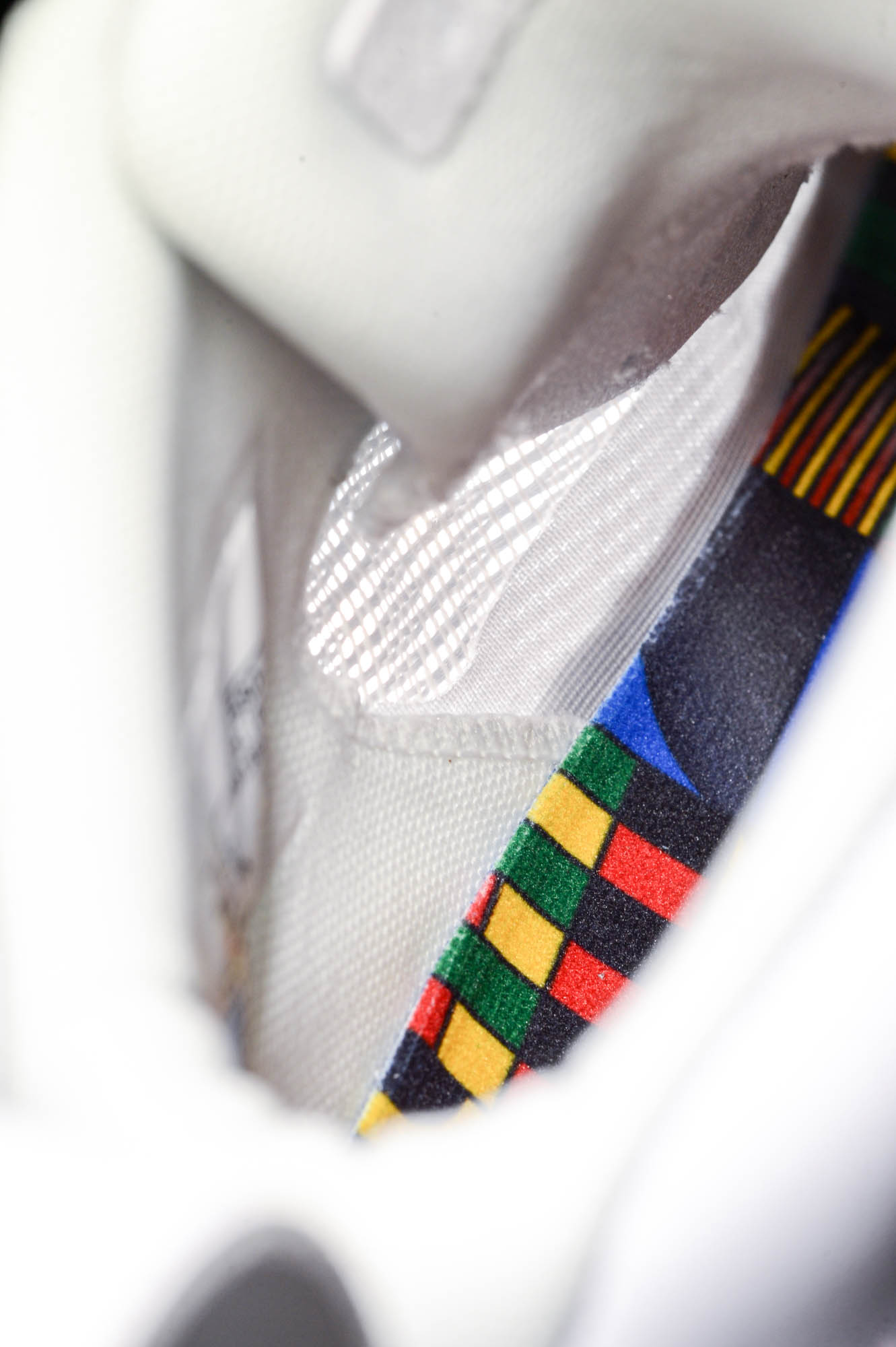 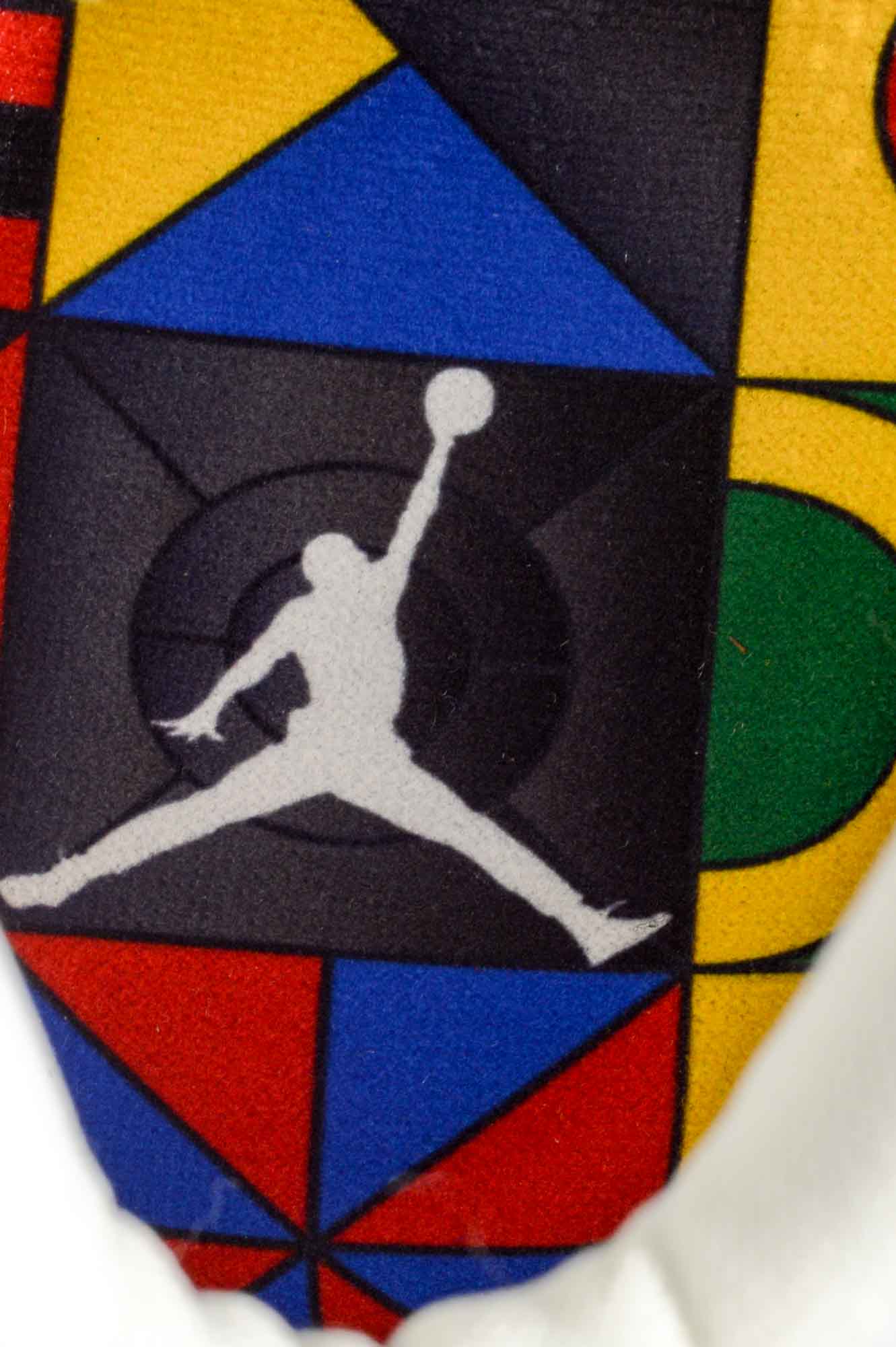 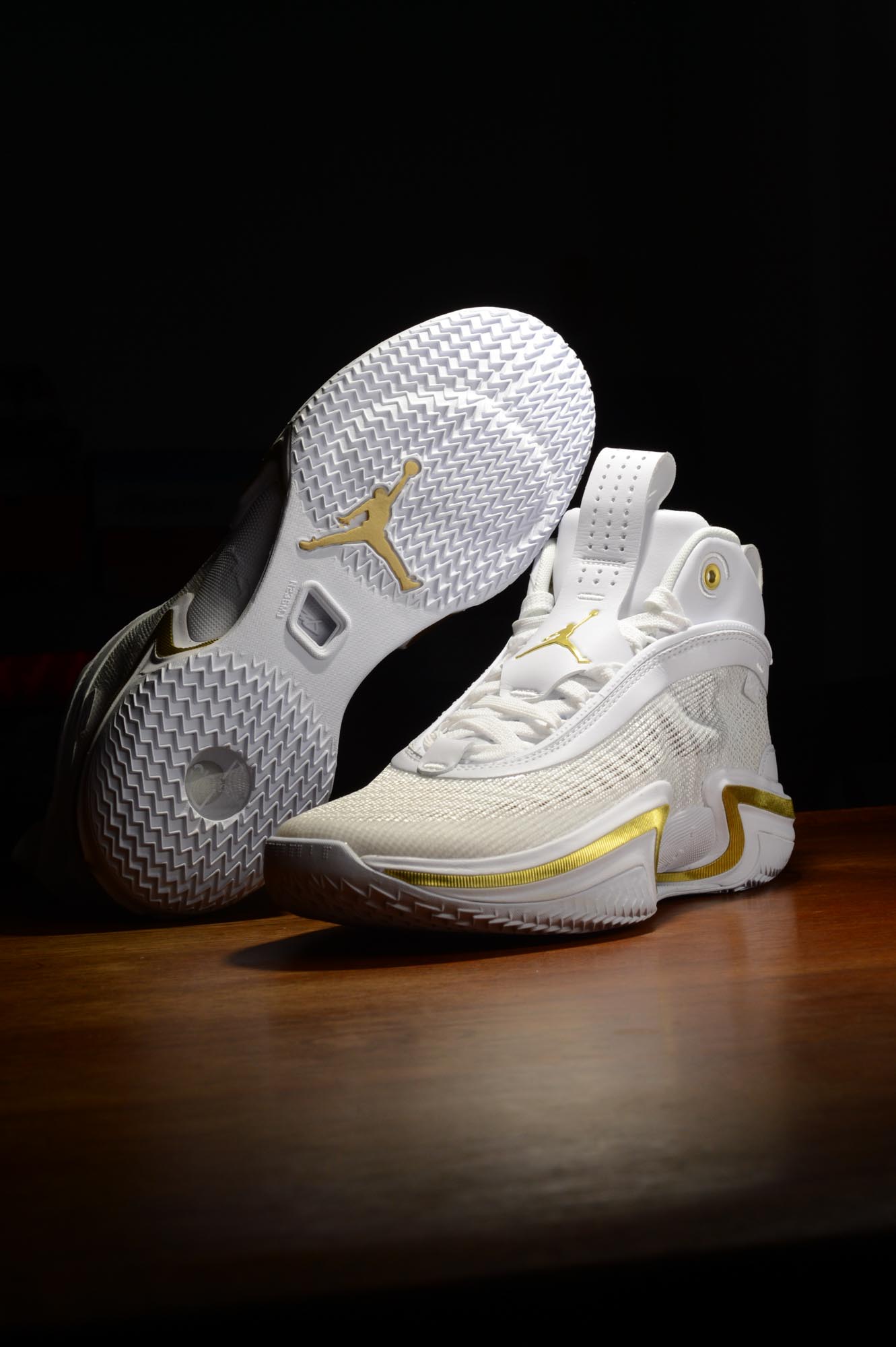 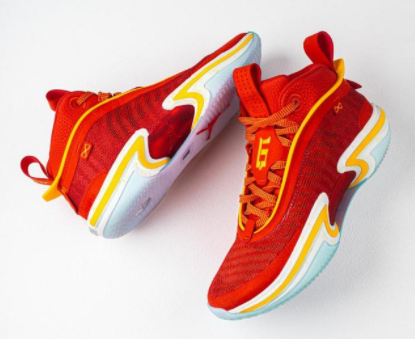 Air Permeability:
The air permeability of Air Jordan 36 is good. It’s said that the vamp of Air Jordan 36 is made of brand-new Leno-weave material which can reduce the unit weight of the shoes, so that the AJ36 can keeps lightweight and good strength.
Fitness：
The fitness of AJ36 is good. Although the vamp material is light, but the fitness is good. And we don’t need to worry about its supporting performance and anti-rollover performance.
Cushion Performance:
The insole of AJ36 uses full-length Zoom Air Strobel cushion with forefoot fanshaped Zoom Air cushion. The forefoot sole has double-deck cushion.
Abrasive Resistance:
The AJ36 has two kinds of outsole for your choice, that is, crystal outsole and XDR wear-resisting outsole. I suggest to choose the XDR outsole which is suitable for both indoor and outdoor courts.
Skid Resistance:
For the outsole, Air Jordan 36 still uses herringbone pattern. As you know, the traction performance of herringbone outsole is good. So that the skid resistance is also excellent. 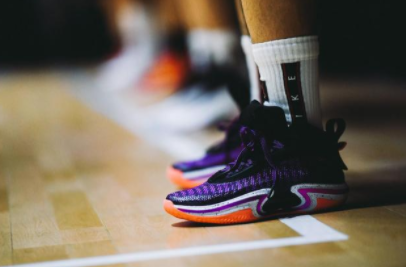 AJ36 is more suitable for defenders, PG and shooters. When guaranteeing the lightweight, AJ36 also keeps good actual performance. But it’s unsuitable for center forward.
Size: The size of AJ36 is standard. But the shoe head of AJ36 is similar to AJ30, it will be a little tight. 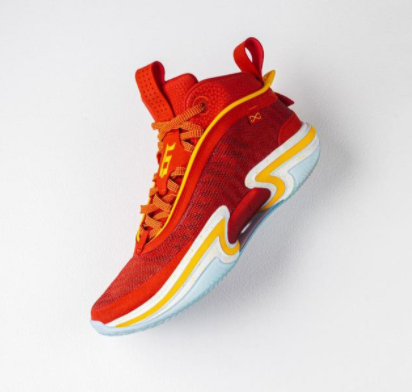 Overall, the center of gravity of AJ36 is a little high, you need to pay attention on the anti-rollover performance. But the vamp strength of AJ36 is good. The air permeability is excellent. The crystal outsole is soft, but as you know, the abrasive resistance will be worse if playing on outdoor court. If you like to play basketball on outdoor court, it’s better to choose the XDR outsole version.